Simon spent much of his adult life in the Labour Party, but joined the Socialist Party in 2014. He had become increasingly disillusioned with a Labour Party he felt was detached from the working class, and was proud to have been formally expelled for nominating a Trade Unionist and Socialist Coalition (TUSC) candidate in his ward for the 2014 elections.

We are for real internationalism. But that's why we need a socialist Europe, not the 'Employers' Union' that is the EU, with its austerity agenda. Tour locations and dates included.

The left-wing commentator Paul Mason had a very disappointing article in Tuesday's edition of The Guardian (There is a left-wing case for Brexit - but we can't let Boris Johnson turn Britain into a neo-liberal fantasy island, G2, 17 May)

In Coventry TUSC won 3,108 votes across the city increasing the vote by 25% from the last set of comparable local elections in 2014. The highest vote was for TUSC national chair Dave Nellist in St Michaels ward where TUSC received almost 20%.

The TUSC candidate for the mayor of Liverpool, Unison national executive member Roger Bannister, polled 4,950 votes, a 5.1% share, over 1,400 votes ahead of the Tories.

The Trade Unionist and Socialist Coalition has released the initial dates of a 20-city tour it is hosting in May and June under the heading 'The socialist case against the EU'.

Following a tremendous campaign with huge support from local residents, TUSC Councillor Kevin Bennett missed out on re-election in Fairfield and Howley by a narrow margin. Polling 921 votes, Kevin was behind the third-placed Labour candidate in the three-seat ward by only 76 votes. 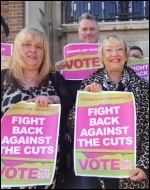 Running up to the May elections the Labour Party right wing set out to damage their own party's chances in order to achieve what is, for them, a greater goal: undermining Jeremy Corbyn 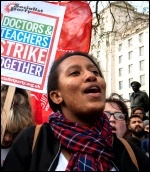 Tories weak and divided - step up the fight against austerity!

After the May elections: The right-wing media had been claiming that this year's elections would prove it was unpopular to oppose austerity. The Blairites in the Labour Party predicted that Labour would lose a huge number of seats

Bristol and Liverpool councils have carried out what can only be described as political censorship of socialists contesting mayoral elections on 5 May. The Trade Unionist and Socialist Coalition (TUSC) national steering committee has agreed to formally complain to the cities' returning officers.