Not many people in Leicester knew that Israel-based international defence electronics company UAV Tactical Systems had a factory at Meridian Business Park, Leicester, until Palestine Action Leicester (PAL) organised a rooftop protest there

Mass protests are showing the dissatisfaction and anger

Protest leaders call for general strike on 14 October: Since the beginning of this year, Thailand has witnessed the rising up of young people and students, who have launched massive pro-democracy protests in several major cities, colleges, and universities.

Can the slide toward a new arms race be halted?: 75 years ago, as World War Two was drawing to a close, United States forces dropped two atomic bombs above the Japanese cities of Hiroshima and Nagasaki 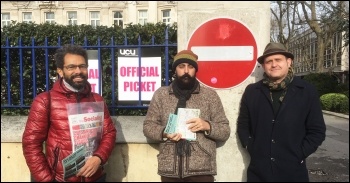 The following statement was issued on 4 November by members of Socialismo Revolucionario, CWI in Chile, and the Committee against repression in Chile