Workers and oppressed must fight both rotten capitalist camps 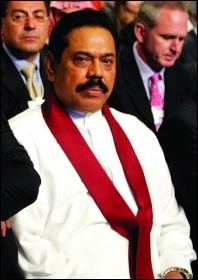 It has seen the president - Maithripala Sirisena - break his coalition with Ranil Wickramasinghe, suspend parliament, and appoint the former dictator-president Mahinda Rajapaksa to take the prime ministership.

The United Socialist Party held its biennial conference just two weeks prior to this development. In our perspectives document, unanimously adopted, we wrote in the first paragraph: "The Sri Lankan capitalist class is faced with a serious crisis. This 'Yahapalana' ('good governance') government can be termed the weakest since so-called independence from British rule 70 years ago."

It continued: "The crisis in the government was evident when President Sirisena and former President Mahinda Rajapaksa - the two opposition political leaders - conspired to have a 'no confidence' motion passed against PM Wickremasinghe... [They] wanted Ranil Wickremasinghe ousted from the premiership.

"But Ranil was able to win the confidence of parliament, defeating the no-confidence motion, and thus he temporarily gained stability. But that did not resolve the crisis in government".

The conclusion of the document emphasised that the social atmosphere we live in today is one of a society where a small vibration could lead to dramatic change.

The legality of this action by President Sirisena can be debated. But more importantly this move was conducted in a completely conspiratorial manner.

This kind of parliamentary coup is new to Sri Lankan politics but we have seen many of a similar nature in the South Asian region - in Pakistan and the Maldives, for example.

This constitutional coup is designed to give time to Rajapaksa to buy MPs over to his side by using his powers as a prime minister. Most MPs have no policies but are there simply for the money and the perks. Some have already started crossing over to Rajapaksa's side.

If, for argument's sake, Rajapaksa cannot get a majority then this can lead to a very volatile and unstable situation. He will mobilise his supporters onto the streets and that can lead to a semi-civil-war situation between the two forces.

This is obviously going to be the last chance for Rajapaksa and it can boomerang against him as well. So it would be wrong to underestimate Rajapaksa: he will do everything possible to consolidate his power.

Already his supporters have forcibly taken over the many key government institutions, like all the state media, and attacked people opposing him. One person was killed inside the Ceylon Petroleum Corporation.

There can be more incidents between now and 16 November. It cannot be ruled out that some MPs will be arrested, including Wickramasinghe, if Rajapaksa and Sirisena feel that they cannot obtain a majority in parliament.

On the other hand, there are campaigns which have started for the release of all the Sri Lankan Army "war heroes" who are in custody for their murderous actions during the recent civil war, and the release of the imprisoned ultra-reactionary Buddhist monk, Gannasara. This is an indication of the nature of a future government under Rajapaksa.

In this crucial situation, socialists have to appeal to all the trade unions and working people, to take an independent stand against both rotten capitalist camps. They must advance demands on key social, economic and political issues faced by the working class the poor, and all the oppressed peoples, including the Tamils.

Clearly, there is no way out for the poor masses in Sri Lanka within the bankrupt capitalist system. There is a great need to fight to build a broad mass working-class party to prepare a long term strategy to establish a workers' government.