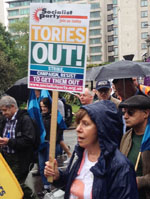 Dancing distractions, Brexit boos, Johnson leadership bids: The Tories are afraid. Of the Brexit negotiations, and of a general election

On the eve of the Tory party conference in Birmingham, people gathered in Victoria Square to protest Tory and Blairite austerity, say enough is enough, and demand an urgent snap election

The Tories are planning a 'Festival of Brexit Britain' in 2022 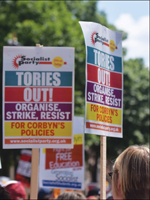 Tory conference was a picture of a party in crisis. Rows and rows of empty seats highlighted the dire state of what was once the most successful capitalist party in the world

Reports from some Socialist Students stalls around the country

Corbyn and unions must call mass action: The divide in the Tory party over Brexit is now wider than the Grand Canyon.

The government's latest policy document on housing is a much-delayed response to mounting anger at the Grenfell Tower fire and the deep housing crisis, with unaffordable homes and increasing number sleeping rough.

Staff and passengers are on same side: Beleaguered commuters learnt on 15 August that they will face yet another increase in rail fares from January.

Fighting fund target smashed - now plan for next quarter: Socialist Party members raised a magnificent £8,453 in the final week of the fighting fund campaign for the April to June quarter. With this last huge effort we reached our national target, raising a grand total of £30,606.