£20.5 billion extra funding isn't enough to make improvements to NHS services, is the conclusion of Simon Stevens, head of NHS England. A row has broken out between him and the government. 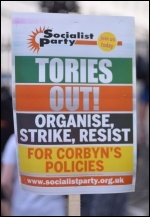 New Tory Department for Work and Pensions Secretary Amber Rudd, of Windrush-scandal notoriety, hailed Universal Credit (UC) as a "tremendous force for good". It's been so good that in her constituency, food bank use went up by 87% in Hastings in the year following UC roll-out.

Just over £35,000 pounds was donated and pledged at the Socialism 2018 rally on 10 November. This is a fantastic result which means we are on course to smash the fighting fund target for the whole of 2018 - but only if we maintain our fundraising drive. So we can't stop now!

General election now to reverse welfare attacks: Universal Credit claimants are being pushed into serious mental health problems, with some even considering suicide, according to public health researchers in the North East. 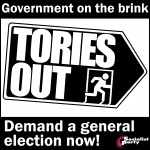 Theresa May's government is on the brink.
This morning the resignations began.
Esther McVey and Dominic Raab were first out the door, along with a number of junior ministers

New winter crisis looms: Now we need to build a movement on a national scale. Health unions should take the lead by initiating mass action 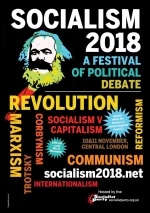 This week's budget shows again the urgent need to kick out the Tories. The Chancellor Philip Hammond says "the era of austerity is finally coming to an end."