Editorial of the Socialist, issue 1074 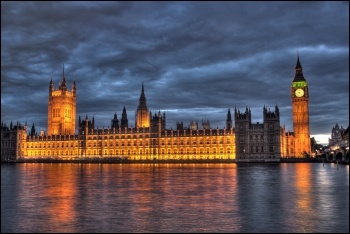 Storm clouds are gathering for Johnson's government, photo by Maurice/CC   (Click to enlarge)

Boris Johnson's "peoples' government" lasted as long as his first cabinet reshuffle, as he packed it with ministers who went to fee-paying schools - 65% compared to 7% in the general population. This was also twice as high as Theresa May's cabinet and more even than David Cameron's government of Eton-educated Tory toffs .

Chief among them is the meteoric Rishi Sunak, Winchester College and Oxford, who benefited from Johnson's defenestration of Sajid Javid to rise rapidly through the ranks to become the new chancellor of the exchequer.

The sudden departure of Javid is an indication of the fault-lines and vulnerability underlying the superficial unity and strength of Johnson's government; divisions that will only worsen as the economy stagnates and Brexit creates new economic and political headaches.

Johnson had demanded that Javid sack all his special advisors in a move to assert his own control over the Treasury. This proved too much even for the mainly compliant chancellor; Johnson's own special advisor Dominic Cummings had already had one of Javid's advisors marched out of Downing Street under police escort. Javid was contemptuously known in Number 10 as 'Chino' - chancellor in name only - and Cummins was being reported on Tory social media to be "writing the budget" himself.

So Sajid Javid has become the first chancellor in 50 years not to deliver a budget - ultimately ditched because he attempted to maintain some semblance of independence of the Treasury from Number 10. His insistence on a 'fiscally prudent' approach of not borrowing for day-to-day spending may have been thought to be curbing Johnson's ability to spend money in the north in order to back up his populist rhetoric and need to be seen to be giving something to former Labour supporting areas.

The prime minister's spokesperson confirmed that the new chancellor had repeated Javid's call for all departments to make 5% cuts "so money could be reprioritised". Otherwise the depth of the continuing capitalist crisis and the effects of austerity on productivity and the performance of the economy does not leave much room for manoeuvre, the Tories having already pledged not to raise income tax, VAT or national insurance.

Any major decisions may now have to be pushed back to a second budget in the autumn, using the excuse that the Johnson loyalist Sunak - a former Goldman Sachs banker and manager of various hedge funds - may need some time to establish himself. What are still certain, however, are the continuing massive cuts being forced on local councils.

The character of the Boris Johnson government is becoming clear as he cements his control, even apparently orchestrating an obedient choral response from his new cabinet. The man who himself refused to be bound by collective responsibility now demands a Trump-style subservience and, as the departure of Sajid Javid indicates, may presage a similar unstable regime as formerly loyal ministers fall out of favour if they fail to fall unconditionally into line.