From: The Socialist issue 900, 4 May 2016: Bring down the Tories: organise to fight austerity 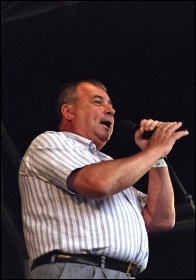 Even when he was general secretary of the TUC, Barber never inspired any confidence as a workers' leader. He came across more like a middle manager who saw the TUC's role as arbitrator between its own members and the bosses it was meant to be fighting.

When it came to the EU, Barber - like many at the TUC - long ago abandoned the idea that workers could fight and beat the bosses. So instead he bows at the altar of the anti-worker EU bosses' club, and prays for a few crumbs from the table.

While some other union leaders have wrongly come out in support of the EU, what none have done so far is openly join up with the Tories. Barber's joint Guardian piece with Cameron has disgusted many trade unionists.

Cameron is a prime minister with the vowed intention of smashing union members' rights through the Trade Union Bill. A prime minister who has already cut over a million public sector jobs, with the promise of a million more. And here we have a former trade union leader openly collaborating with him.

What now appears to be emerging is that - far from conducting a fighting campaign to defeat the Trade Union Bill - a number of union leaders were willing to do a deal with the Tories.

They have come to Cameron's rescue over the EU referendum in return for a couple of concessions on the bill - clauses that even Tory Lords didn't want.

The message these so-called workers' leaders are sending to the Tories is criminal. All the bosses have to do is threaten the unions' funding - and these 'leaders' will come running.

The Socialist Party campaigns for fighting, democratic trade unions based on workers' struggle, not backroom deals with the bosses.