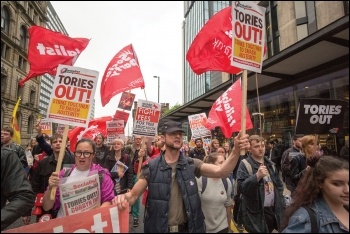 This year, and in this particular issue of the Socialist, we are celebrating the anniversary of the Russian revolution and drawing out the lessons for the workers' movement today.

The programme and the methods of the Bolsheviks were crucial to that victory, and underpinning this was the finance that enabled them to produce their paper, Pravda, their leaflets and other material. This was hard won and desperately needed - as soldiers at the front wrote saying "we are living only on the rumour of your papers".

The world is not the same as in 1917 but one hundred years later the gap between rich and poor is greater than ever and capitalism still can't guarantee a decent life for the majority. Even in the richest countries young people today will be 43% worse off than their parents.

Theresa May claims that capitalism is the best way to raise living standards - that may be true for the richest thousand people in Britain who have seen their wealth double in the last ten years but it won't convince young people that there is a future for them under this failing system.

Just as in 1917, socialist ideas are the key to building an alternative. In the 1980s Militant, the forerunner to the Socialist Party, showed how the ruling class could be defeated - by building mass campaigns to resist the Thatcher government's cuts in Liverpool and for mass non-payment of the poll tax. At the same time we linked those struggles to the need to change the system.

Like the Bolsheviks, we have no rich backers. That's why we need your support to help raise the finance to enable us to get our ideas out to as wide an audience as possible. A proportion of the money we raise at Socialism 2017 will also go to assist our sister parties in the Committee for a Workers' International (CWI - the socialist international to which the Socialist Party is affiliated).

You can help the work of the Socialist Party and the CWI. Can you give £5, £50 or £500? Can you ask other members and supporters to donate? Every donation, no matter how small, will make a difference and all of it will go to building support for socialist ideas.