Marching to TUC congress after the NSSN rally, 9.9.18, photo by Mary Finch   (Click to enlarge)

The packed rally fizzed with determination and focussed on the key questions facing trade unions: how to overcome the anti-trade union laws and make action happen; the right-wing Labour councils cutting jobs and services; the question of the future facing young people and how to get them into the unions; how to fight racism that divides the working class; and, of course, how to get the Tories out and a Jeremy Corbyn-led, anti-austerity government in. 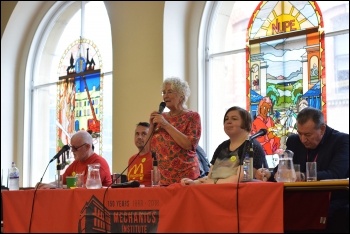 Linda Taaffe, NSSN national secretary, opened the rally. Linda reminded us of how our movement has been built on the struggle of the working class fighting together - to build the unions, to fight for the NHS and council homes, to win workers' rights. But the Tories threaten all of that. So we must take the best lessons and work out how to apply them today. How does the trade union movement respond to the situation "where the rich get bailed out and the working class gets driven out?"

Linda reminded us of the incredible movement that was mounted in 2011 to defeat Tory austerity. That movement was betrayed by the right-wing trade union leaders. However, 'there is no alternative' to workers organising, demonstrating and striking together, and that is what the NSSN is fighting for.

Praise for the role played by the NSSN in building solidarity and support for workers in struggle was on tap throughout the speeches. This included Unite the Union general secretary Len McCluskey who made a surprise visit and gave an impromptu speech. This reflects how the NSSN rally has become the most important left fringe at the TUC congress.

One thing the rally demonstrated in spades is that any reports of the so-called death of trade unionism have been greatly exaggerated. Communication Workers Union (CWU) deputy general secretary Terry Pullinger described how had not had to go on strike to win its very significant victory, but had reached down to the workers and their reps on the ground to get a huge majority of 89% voting yes for strike action on a 74% turnout. 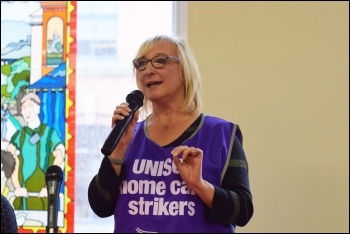 Royal Mail is now complaining that there are more disputes than before - because that dispute "drew a line at the abuse and the chipping away" and workers' confidence has been increased. He warned emphatically against any leadership that drifts off and becomes irrelevant to the members and reps.

Home care workers in Birmingham are striking against brutal rostering changes and pay cuts of up to £11,000 for some. They took inspiration from the bin workers who fought and won in the city last year. Mandy, one of the strike leaders, described the obstacles facing home care workers who work individually. A Blairite council that promised self-rostering and betrayed that promise after the election. And having to re-ballot under the anti-trade union laws - but they came back with a higher turnout of 57% and 97% in favour of strike action. 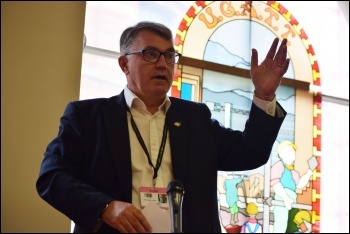 RMT general secretary Mick Cash spoke after the rally applauded the memory of trade union militant and RMT member Stan Herschel who sadly died recently. Mick also paid tribute to the strike by guards against the threat of driver-only operation. That dispute has been going on for years and is the longest in the union's history. One of the striking guards from Northern Rail spoke to explain the safety-critical role they play, that the rail companies only want profit and to demand support from the TUC.

Both the necessity of and the potential for coordinated action were a theme taken up by a number of speakers. Unite's assistant general secretary Howard Beckett spoke about how Labour councils across the board were attacking workers, raising the potential for coordinating some of those disputes across the country. Coordination was also raised up by bakers' union BFAWU general secretary Ronnie Draper when talking about action in the fast food and restaurant industry, with action planned in Wetherspoon's and McDonald's, as well as in TGI Friday's where Unite organises.

Howard was not alone in talking about the need to fight Labour councils who have not changed their spots under the leadership of Jeremy Corbyn. Bill from the victorious Mears housing workers dispute in Manchester reported that when the strikers attempted to attend a meeting of the Labour-led Manchester council, instead of meeting the workers and supporting them, the councillors cancelled the meeting! 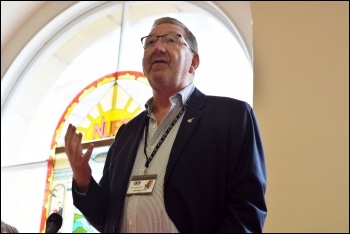 Len McCluskey finished his speech saying it was a privilege to see what Liverpool's socialist-led council did in the 1980s. He saluted Tony Mulhearn in the audience who was a leader of the council that refused to pass on Thatcher's cuts and instead built homes and created jobs and apprenticeships. For Labour councils who say they will carry on cutting and keep their reserves for a 'rainy day', he pointed out that for working class people "it's teeming out there".

Civil service union PCS assistant general secretary Chris Baugh was among those who spoke from the floor. He was one of many who raised the need for the trade unions to appeal to the young people suffering under austerity. He rightly said that it's action that makes trade unionism attractive to young people. Amy Murphy, the newly elected socialist president of the retail workers' union, Usdaw, pushed the campaign for a £10 an hour minimum wage and an end to zero-hour contracts.

As a trade union council secretary Linda was very pleased to welcome Paul Rafferty, secretary of Manchester trade union council. He developed the point touched on by others, including PCS president Janice Godrich, about the danger of the rise of the far right. He raised that the unions have to take the lead in the fight against racism. He correctly said that we need a programme of fighting for real jobs and council homes for all, and good services to cut across the lies peddled by the far right.

Rob Williams, NSSN national chair, was the final platform speaker and closed with a clarion call to the labour movement to fight hard for a general election. To massive applause he argued that the only 'people's vote' that matters is one that ushers in a Jeremy Corbyn-led anti-austerity government. Our movement now has to organise, demonstrate and strike if necessary to bring a general election.