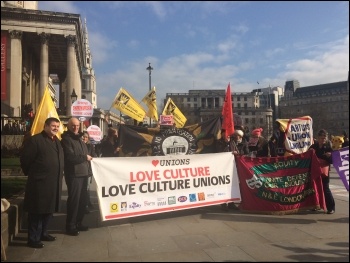 The speed of response and many of the proposals in Equity's 'Agenda for Change' report are very welcome. But it says little on the fundamental issues: collective action, and the structural power imbalance arts workers face.

A few years ago I was a deputy - Equity's name for workplace reps - on a performance at a well-known outer London theatre. Several members complained about inappropriate behaviour including groping by the head of the venue.

I suggested to my members that I have a word with him, mentioning no names, to get him to stop.

But at the time he was dangling over us the possibility of finding funding to tour the show. This would have meant extending the precarious employment of the whole company by weeks or maybe more.

Understandably, despite my arguing for it, my members asked me to take no action, fearing he might withdraw the offer. It never materialised, of course.

This same venue head, by the way, had tried to have me sacked after I asked cast and crew not to use the tube in solidarity with ongoing strikes. The show director, a fellow Equity member, refused to sack me. But both episodes show the disproportionate power arts managers can wield.

Equity's report asks casting directors, agents, workplaces, drama schools and so on to formulate and publicise anti-harassment policies. This has been standard practice in other industries for some time. It is long overdue in entertainment.

The union also makes its own commitments, all good. These include updating union contracts, challenging the scope of 'non-disclosure agreements', special training for deputies, and an "awareness" campaign.

Using the current post-Weinstein and Spacey embarrassment at the top of the industry to push for more robust anti-harassment policy is important. And Equity's report does recognise that "it should not be up to brave individuals to make a difference."

However - aside from encouraging members not to be "bystanders" to harassment but to "call it out," and appealing to the consciences of industry chiefs - there is no strategy for enforcement.

Trade unionists should challenge harassment and bullying. And their union should back them in doing so - as the report also promises. But it is not enough, as it implies, to limit this to legal action.

Court cases can be distressing and difficult to prove. And the process is long. Artists may well have moved on to multiple different gigs before it concludes.

For arts workers to have confidence in fighting these very serious issues requires more than vague promises of "support."

And as well as lobbying Westminster for stronger anti-harassment laws, the union should campaign for a funding and ownership structure that takes the power off the bosses.

A massive expansion in arts funding, and publicly owned, democratically controlled arts facilities, could help free entertainers from dependency on the impresarios.

Equity's new 'arts policy and campaign working party' should include principles like this in its proposals to the union's governing council.