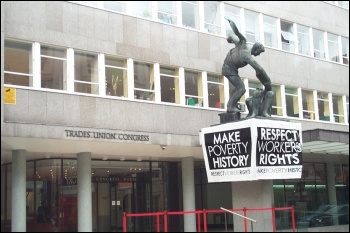 TUC Congress has unanimously passed an RMT motion calling for an emergency conference to discuss resistance to the government's Trade Union Act. In moving the motion, RMT President Sean Hoyle said one of his first acts as RMT president was to go on a lobby of Parliament against the bill, noting it was the same place that passed the Slavery Abolition Act in 1833. But now the Trade Union Act will be used by bosses to hinder workers' democratic rights. Sean pointed out that some concessions were won by the trade union movement when the bill became an act but we shouldn't "be happy with crumbs". He also called for the emergency conference to discuss general strike action to resist the act. The motion was amended and seconded by the Fire Brigades Union, National Union of Teachers and Unite.

For a report of the National Shop Stewards Network (NSSN) lobby of the TUC see pages 8&9 and see next week's issue of the Socialist for a report of TUC Congress 2016.

Guards working at Met Police control centres in Bow, east London and Hendon, north London, took strike action on 9 September in response to worsening pay, with real terms rates falling year on year and starting salaries now less than £22,000, including working nights for no extra pay. Night shift walked out from 1am and 7am, with the day shift out between 7am and 1pm. PCS reps at the control centre at Hendon reported 100% of members took strike action both on the night shift and day shift. The strike action coincided with the passing out parade for over 1,000 new police recruits and the pickets reported that they ran out of leaflets. Similarly, at Bow there was 100% turnout, with ten people on the picket line. PCS Met Police branch and Unite joined the picket line to show their support.