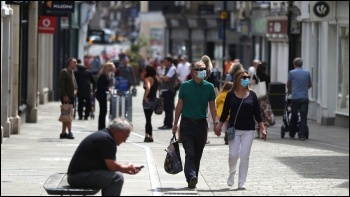 Undoubtedly, bosses in retail will be keen to throw their doors wide open on 3 December, as they try to claw back lost revenue. And many shops are intending to open for 24 hours a day after the government announced it would relax opening rules.

During the first UK-wide lockdown businesses were keen to show how 'responsible' they were by introducing customer limits and implementing government guidelines on Covid-secure workplaces.

On paper, the guidance issued jointly by the British Retail Consortium and the retail workers' union Usdaw looked like it should protect retail workers. But without the union using its collective strength to monitor and enforce these rules, they simply remained pieces of paper as companies eyed up their bottom lines.

Over the last few months, we have seen shops getting more and more lax at implementing such measures, meaning that shopworkers and customers are put at increased risk. Supposedly 'safe' store capacity levels have been subject to inflation through the pandemic, resulting in supermarkets now being the leading place for Covid transmissions. Though the 24-hour openings are supposed to reduce overcrowding in the run-up to Xmas, none of those opening 24 hours have announced plans to lower capacity limits!

This shows the short-sighted nature of the 'tripartite' approach of 'partnership' with the employers and Tory government that Usdaw general secretary Paddy Lillis seems to promote on every occasion. Over the last few weeks, the Activist, the bulletin of Socialist Party members in Usdaw, has received numerous reports from lay members and union reps about store capacities being dramatically increased.

Instead of leaving union reps to effectively fend for themselves, the collective strength of the union should be brought to bear through a trade union-led campaign over workplace safety, with health and safety reps and committees signing off on safety measures including store capacities.

Such measures will be justified by the bosses saying that otherwise they could go under. With companies such as Arcadia group (including Topshop and Miss Selfridges) and Edinburgh Woolen Mills (including Peacocks) having fallen into administration, and Debenhams preparing to close, on top of 6,200 redundancies previously announced, then this is a real threat including workers' redundancies and pensions.

In the first instance, these companies should turn over their books to trade union inspection to ensure that they're not simply trying to protect the shareholders at the expense of the workers. If companies are genuinely struggling, they should be brought into public ownership to protect jobs. Such a demand should be included in Usdaw's new deal for workers campaign, as it is already union policy.

Usdaw is the fifth largest trade union in Britain, with close to 400,000 members and hundreds of thousands more shop, distributive and allied workers desperately in need of trade union organisation.

By building an audacious campaign to defend jobs, fight for decent pay, including hazard pay and unsocial hours premium payments, and demand workers' control and management of safety while developing a strategy of public ownership to overcome the looming crisis in retail, thousands more could be won to Usdaw to enthusiastically take up the fight.