From: The Socialist issue 1116, 13 January 2021: Our health and livelihoods before their profits 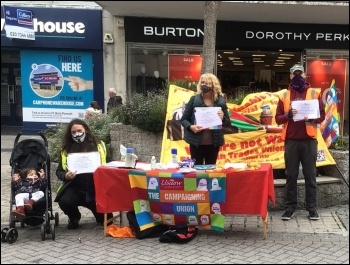 With Covid decimating the retail sector, it is vital that Usdaw takes a lead in organising retail and distribution workers in supermarkets, high street chains and smaller, independent businesses.

Workers shouldn't pay for this crisis, every job must be defended.

We need an end to zero and low-hours contracts, except where members specifically opt in.

Supermarket and distribution staff have worked through three lockdowns to ensure that everyone in Britain has access to food. Retail and distribution workers should be rewarded with wages that reflect their status as key workers.

This is why we need £12 an hour as a minimum wage with hazard pay for workers putting themselves at risk to continue to deliver what has been recognised as a vital service.

We shouldn't shy away from taking industrial action up to and including strike action if supermarket bosses refuse to give up their bumper profits.

We need to challenge companies like Sainsbury's which can afford to pay out massive dividends to shareholders while simultaneously putting thousands of jobs at risk.

With each subsequent lockdown we have seen many names disappearing from the high street for good. We need a leadership prepared to roll out a retail industrial strategy calling for public ownership to save the hundreds of thousands of jobs currently at risk, whether it be Debenhams, the Arcadia Group or any of those on the growing list of retailers who have fallen into administration.

If elected, I would take such a strategy to the Usdaw executive council to ensure that key supermarket workers and non-essential retail and distribution workers alike are protected. A vote for me is a vote for a fighting, democratic leadership.