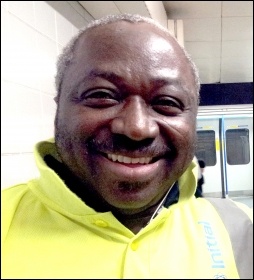 Joseph Mambuliya is chair of the RMT London Underground cleaners grade committee, and is standing for TUSC in Barking.

Pete Mason spoke to Joseph about why he's standing.

How did you get active in the RMT?

When I started working as a cleaner on the London Underground in 2002, I saw the way the cleaners were being treated and bullied. It reached a point where their self-esteem was so low that they couldn't defend themselves.

I was approached by a union activist who recommended me to the union for training as a health and safety rep.

When I went for training at RMT headquarters I met Bob Crow and other union leaders who showed me that we should not be afraid to stand up for ourselves. As a health and safety rep I was trained to recognise health hazards. That boosted my confidence and I started to stand up and represent people.

I became chair of the RMT London Underground cleaners grade committee in 2007. The treatment of the cleaners had not changed - short payments, moving people to different locations without prior notice. We are looking to ballot for industrial action in the near future.

What made you decide to stand for TUSC?

The day I watched Bob Crow walk out of a Labour Party meeting, looking furious. Bob had seen that the Labour Party no longer stands in the interests of workers - that motivated me to do something.

The good news is that the RMT union has come together with the Socialist Party and others in the Trade Unionist and Socialist Coalition.

Otherwise we are all going to sink in the austerity deluge. So I decided to take the challenge and stand as a candidate - for council in May 2014 and now against Margaret Hodge who is the current MP in Barking.

How is the campaign going?

Very well. We have had publicity from the Barking and Dagenham Post. We have given our encouragement to the bus drivers - going down to the picket lines when they were on strike.

We have given our support to the bin workers who are losing money at this critical time. I'll raise support for them at my union's cleaners grade committee.