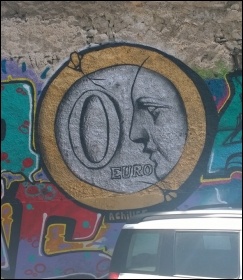 For an independent workers' voice

The debate on European Union (EU) membership has been reduced in the establishment media to a clash between different wings of the Tory party.

It's Cameron versus Boris, they say. Two old Etonians - with another ex-public schoolboy, Nigel Farage, in the ring too.

But what about if you're outside the 1% elite? Struggling to get by on low wages, a zero-hour contract maybe, or facing soaring rents and underfunded public services? Who's campaigning for our interests in the debate?

The Trade Unionist and Socialist Coalition (TUSC) - which includes the Socialist Party - is arguing for a leave vote in June's EU referendum.

We stand in the tradition of the late Bob Crow, leader of transport union RMT and co-founder of TUSC. He was well-known for his support for international workers' solidarity, while opposing the EU as a body that pushes anti-worker, pro-austerity policies.

TUSC's core policies include renationalising the railways, Royal Mail and other privatised public services, industries and utilities. We stand for defending the right to asylum and opposing racist immigration controls. And we want democratic public ownership of the banks and major companies.

None of these policies are compatible with EU treaties. So why should we give a vote of confidence to EU laws and institutions - which, as Greece has shown, will be used to try and block socialist policies?

TUSC stands for real internationalism. Many of our problems - from economic stagnation, endless wars, the appalling treatment of refugees, to planet-threatening global warming - can only be solved at an international level.

If society remains organised as it is today, divided into competing nations by the capitalist profit system which the EU helps maintain, the prospects for humanity will be bleak indeed.

But that's why we need a socialist Europe. Not the 'Employers' Union' that is the EU, with its austerity agenda.

Voting to leave on 23 June is a step towards defeating a weak and divided Tory government. This would aid the building of a movement that can unite workers across Europe to fight for a different world.

Read more about why workers should vote Leave at www.socialistcase4exit.eu