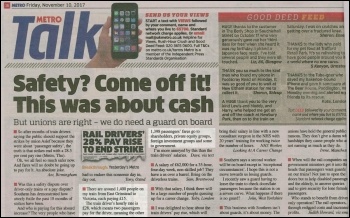 The establishment press has tried to slander rail strikers as greedy. But we think Dave, a letter writer in the 10 November Metro, has a better angle.

"There are around 1,400 people on my train from East Grinstead to Victoria, each paying £15.

"The train driver's hourly rate is £28, which means two passengers pay for the driver, meaning the other 1,398 passengers' fares go to shareholders, private equity groups, foreign investment groups and some to government." 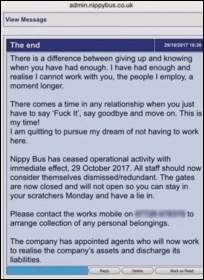 The message redundant workers received from Nippybus, 29.10.17   (Click to enlarge)

A tantrum-throwing boss scrapped his bus company overnight - and let his entire staff know they were redundant by email.

A sacked driver said "everyone was doing long shifts, but he just expected us to do them. The memo makes out that it's the drivers' fault this has happened, but without us he would never have had his company."

Too true. Sydney deserves the sack, not the hard-working staff who made his money for him. Nationalise Nippybus!