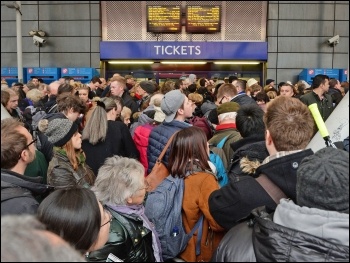 Christmas has come late as far as Britain's rail providers are concerned. Rail fares are set for yet another increase, this time by an average of 2.3%.

Protests have taken place at stations across Britain against rip-off fare hikes.

And further strikes are due by workers on Southern Rail, as well as staff in London Underground ticket offices.

The price rise, which comes at a time when wages are stagnating, will mean that on average 14% of pay is going on rail fares. Commuters into London pay on average £387 a month. In Paris and Rome, this figure is just £61.

Still, at least all that money is going where it's needed - isn't it? Year on year we are told the money is spent on improving rail infrastructure.

That's why we can all enjoy journeys on overcrowded trains. Cosy. And vintage rolling stock too. Britain's trains are - on average - 21 years old.

If you travel on Northern Rail, you can save yourself the bother of showering before you go out. The carriages are notorious for leaking windows and vestibules.

The executives are doing all right though. Private train operators have taken a staggering £3.5 billion for (mis)running Britain's railways over the past ten years.

This means we have been able to reward people like National Express chief exec Dean Finch, and Sir Brian Souter, Stagecoach founder, who received £3.3 million and £17 million respectively.

The most richly deserved reward, of course, went to Go Ahead chief exec David Brown, who received £1.3 million. Go Ahead is parent company of beleaguered operator Southern.

Southern has decided to do away with passenger safety, and attack workers' jobs, by getting rid of guards on trains. All good, unless you are unlucky enough to have an accident boarding the train, or are a disabled person needing access.

While drivers and guards rightly struck against these attacks over Christmas, Southern is still receiving £50 million of taxpayers' money! In truth, this is payment by the government to break the power of the transport unions - in particular the militant RMT, which represents guards.

The railways must be taken into public hands, under the democratic control of workers and commuters, to end the chaos that currently blights the system.

The Socialist Party calls for the joining up of workers' and commuters' campaigns into a mass struggle for a transit network that works for the millions, not the millionaires.