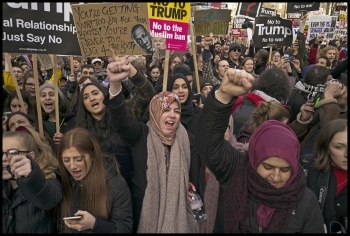 Like millions of people around the world, I'm angry that the disgustingly racist and sexist billionaire Donald Trump is president of the United States.

That's why I'll be joining students from schools, colleges and universities across Britain in walking out on Day X - the day that President Trump first sets foot in Britain.

Since Trump's inauguration, millions have mobilised and taken to the streets to oppose his actions. Significantly, protests resulted in the halting of the Muslim travel ban - a policy that just days into his administration provoked widespread revulsion.

UK prime minister Theresa May not only failed to condemn this despicable policy. She and Trump showed that the 'special relationship' between the UK and US governments is alive and well, with a sycophantic display of cosy hand holding! There's no doubt that she'll be greeting him with open arms but students and young people will not be so welcoming.

Day X isn't just to protest against Trump, it's also to protest against the system. A system run by a corporate super-rich elite which managed to throw up the two most unpopular US presidential candidates in history - Trump and Clinton. So disliked that one poll revealed that one in four 18-35 year olds would choose a giant meteor colliding with Earth over voting for them!

For the majority of Americans who've seen their living standards drop for decades, Hillary Clinton offered more of the same. Trump posed as anti-establishment, but this is not the case. His interests lie with his billionaire friends.

It's important to fight Trump, but replacing him with another representative of the 1% is not the solution. Most Americans want genuine hope and change - decent jobs, affordable homes and free education.

On Day X we'll be fighting against racism, sexism and austerity, and supporting our US brothers and sisters in their campaign for an independent party with socialist policies to fight for a future for the 99%.