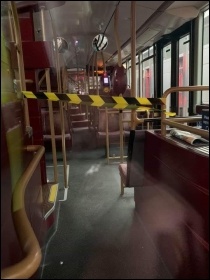 Now, a study by University College London has 'established' that doors are safe to reopen.

Many drivers think that doors are being reopened because TfL wants to collect revenue. Unions must not fall under pressure to reopen doors because of revenue. Collection of revenue must never be the priority. We must make sure that cabs are sealed off.

Unite union correctly gave power to its health and safety reps at every garage to ensure buses are sealed off before leaving the depot on 30 May,.But it failed due to poor planning, and companies let out buses regardless. Many reps weren't working on 30 May, and some reps didn't know about it. That's why it's important to demand more health and safety reps - it can't be right to have just one rep who may find it difficult to attend a union course.

On 30 May, some buses left the depot with different types of designs to seal the bus cabs, not all agreeing to the union's rule that it must not have a gap of more than 5mm. Some plastic materials were flimsy and melted from the hot weather, and fell off. In order to have one design we must have one publicly owned bus service, where workers' democratic control and management will ensure safety.

Simultaneously, the bus capacity was reduced. Drivers are now able to skip stops, but drivers had to wait for this safety measure to be confirmed as management previously told drivers not to do so. But some drivers did it regardless because they felt that the virus can pass through if they had too many passengers.

To ensure safety for drivers and passengers across all the network, we demand a London-wide safety agreement from Unite. This should be on the basis of a meeting of convenors, reps and health and safety reps looking at the scientific evidence, including the risk assessments of union reps.