Attempts to move to driver-only operation have been pushed back

Shipbuilding workers in the GMB and Unite are striking

Public transport across Merseyside was nearly shut down

The Labour-run 'Liverpool city region transport committee' still intends to take guards off the trains and introduce 'driver-only operation'. We support the RMT, taking 24-hour strike action against this on 8, 10 and 23 of July.

Hilary Mooney, for over 50 years first a supporter of Militant and then a member of the Socialist Party on Merseyside, has sadly passed away at the age of 71 after a lengthy period of illness that she bore with great fortitude.

We are appealing to all our readers and supporters to help the Socialist Party hit our target of £35,000 for the final quarter of the year, enabling us to achieve a record fighting fund total for 2015.

On 14 and 15 May, PCS members working in Land Registry (LR) responded overwhelmingly to a call for strike action 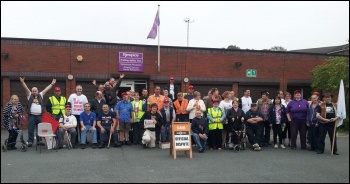 The second day of strike action at the Leeds Remploy factory saw large numbers of pickets once again.
Posting updated 27.7.12

'Struggle or starve!' 1932 - when Birkenhead workers beat the means test