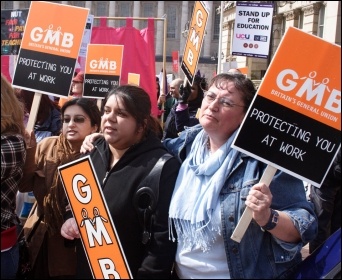 I became involved with the Socialist Party over a period of time. It became obvious to me that the system does not work for most people. What is offered to voters as a 'choice' does nothing to address the real problems people face.

Coming from a typical working class background, I voted Labour and was always in a trade union, organisations we used to be taught would protect our interests.

But I felt that mainstream politicians and many union officials did not represent me. They weren't even concerned with helping working people improve their conditions. Instead, the vast majority seemed to be preoccupied with their own careers, and would do anything not to rock the boat - lest it harm their prospects.

The Socialist Party, more than any other party on the left, has aligned itself with the rank and file. What I find most refreshing is the Socialist Party's willingness to engage directly with people, and through direct action and organisation work to empower the majority disregarded by the main parties.

The party has won the trust of workers in countless industrial disputes, as well as campaigns such as opposing cuts within the NHS or public services. I am proud to be a member of an organisation fighting as part of the Trade Unionist and Socialist Coalition for the political representation of ordinary people's interests. 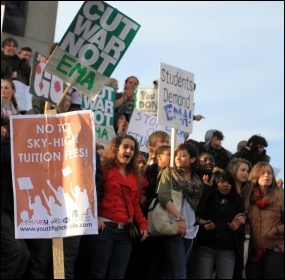 Students protest against tuition fees and the abolition of EMA, photo Senan   (Click to enlarge)

February will mark a year since I joined Socialist Alternative (co-thinkers of the Socialist Party in the United States). Like many people, I had heard of Kshama Sawant in Seattle and the campaign for a $15 an hour minimum wage.

One afternoon, in a fit of panic as to what I was going to do with my life after I graduated from university, I came across the Socialist Alternative website and asked to find out more. A few weeks later, without knowing that much about what Socialist Alternative was, I met with others in the San Francisco Bay area where I was living at the time.

I had never thought of myself as a socialist, but always had views that leaned left. Let's just say, at that moment, I finally found a place where my voice mattered. What I had always thought about the political system and the current economic crisis was all on point with the views of Socialist Alternative - and now, living here in London, the Socialist Party.

I know my generation is not going to have the future that was promised to our parents unless we fight for it. As a recent graduate, and now as a master's student, this harsh reality really hits home. What I was taught my whole life - that getting an education is key to a successful future - is now a lie. My peers who hold degrees are working in coffee shops and at the shopping mall.

I refuse to let this be my future. That is why I joined Socialist Alternative, and am now a proud member of the Socialist Party.

Want to join or find out more? Call the Socialist Party national office on 020 8988 8777, or email join@socialistparty.org.uk