Reports from West London and Brighton

Just some of the sales of the Socialist newspaper in the past few days... 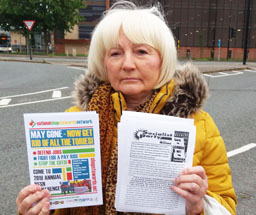 Workers at several branches of McDonald's, Wetherspoon and TGI Fridays have struck together, joined by couriers for Uber Eats and other gig economy workers #FFS410

Members of Brighton Socialist Party attended Brighton Pride on 4 August. Although it is the UK's biggest Pride event, drawing in more than 400,000 people this year, in recent years it has been largely depoliticised.

Non-fiction: Our Revolution: This book 'Our Revolution' by Bernie Sanders is a bestseller which charts his campaign for the Democratic nomination. He is scrupulous in making it clear it was grassroots activists that made this possible.

A lunchtime walkout preceded a full day of action, after a magnificent 85% vote in favour of striking against forced redundancies

Deliveroo has ceded ground to its workers in Brighton by imposing a recruitment freeze so that existing cyclists and scooter riders don't see their hours diminish further. This is in the face of pressure exerted by the strike of 14 February and a petition signed by over 20,000 people.