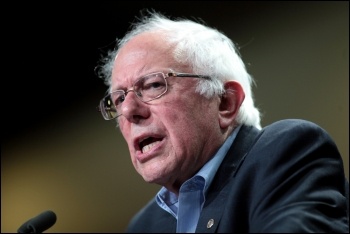 Bernie Sanders should take the initiative to launch a radical workers' party in the US, photo Gage Skidmore (Creative Commons)   (Click to enlarge)

This book 'Our Revolution' by Bernie Sanders is a bestseller which charts his campaign for the Democratic nomination. He is scrupulous in making it clear it was grassroots activists that made this possible.

The book is very useful as an indictment of American capitalism. Just one example: the press is full of stories of welfare recipients as a "burden" on society, but does not mention the Walton family, owners of Wal-Mart. Bernie Sanders does.

"Wal-Mart makes huge profits by paying its workers wages that are so low that the workers not only qualify for, but need, public assistance just to get by... When you add it up, it turns out that US taxpayers are subsidising Wal-Mart's low wages to the tune of at least $6.2 billion each and every year."

His proposal is that Wal-Mart should pay its workers $15 an hour. This is a proposal socialists support.

However, Bernie intends only to 'civilise' and 'tame' the corporations. He has not gone so far as to suggest expropriating them. I can assure you they would be as tame as anything under those circumstances.

A turning point for many was when it became clear Hillary Clinton would get the nomination. Bernie gained some concessions from the Clinton campaign before offering his endorsement.

The only trouble is that no worker could possibly trust the "candidate of Wall Street," to use Bernie's own expression, to carry out any of these concessions on policy.

Unwittingly, the book makes the case for building a workers' party in the United States. A party which would not be in thrall to Wall Street, and could take power away from the corporations.

And that is when the real "revolution" starts!