Short stories on some of the news this week.

GMB union members at 12 Asda stores around Britain staged protests on 16 September against the imposition of new, rotten terms and conditions known as 'Contract 6'

Editorial of the Socialist: Boris Johnson's victory in the Tory leadership election will probably turn out to be the most predictable political event of 2019

Neither Boris Johnson nor Jeremy Hunt offers a decent future for workers, young people and others facing hardship. Does this mean we should be despondent? Absolutely not!

The role of pro-market policies is clearly exposed as creating "a digital and sanitised version of the 19th-century workhouse, made infamous by Charles Dickens"

TV review: At the end of World War Two, US imperialism calculated the British Empire was a spent force and the US could take on the mantle of world power 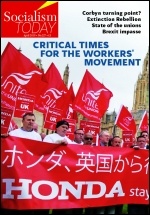