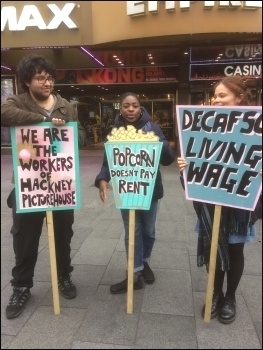 Strikers from Picturehouse cinemas in Brixton, Crouch End, Hackney and Central, gathered in Leicester Square on Saturday 25 February to make a big noise about the way their demands are being ignored. They are mostly young and very angry that their employer, Cineworld, which makes tens of millions of pounds of profit a year, refuses to pay them the London Living Wage (£9.75 an hour) or cover sickness and maternity leave. The company's boss is on £1.2 million - £575 an hour!

The cinema workers are members of the union Bectu, which is now part of the union Prospect, and a number of union officials joined other supporters on the demo. The Empire in Leicester Square was chosen as a target for the demonstration as Cineworld has just found a cool £92 million to buy the chain that this prestigious cinema belongs to. 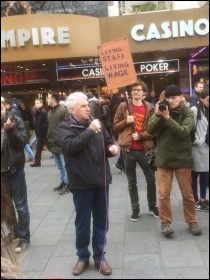 At one point in the afternoon, a lively march with whistles and flares made its way around the block to the headquarters of Cineworld and past another couple of its cinemas (including Central where managers were struggling to keep the place open). It came noisily back to the square through China Town.

The message of the strikers was conveyed to as wide an audience as possible with live-streaming of the whole event. There were placards and leaflets, music and drums, as well as chants and speeches. When John McDonnell, Shadow Chancellor, made it to the demo, his expression of full support for the strikes - from himself and Labour Party leader Jeremy Corbyn - was warmly received. The struggle goes on.

This version of this article was first posted on the Socialist Party website on 27 February 2017 and may vary slightly from the version subsequently printed in The Socialist.