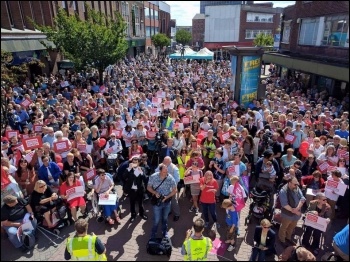 We have recently witnessed in Stoke-on-Trent the fundamental chasm that exists between the Blairite Labour right wing representing the big business establishment and the anti-austerity and socialist movement that's developing behind Jeremy Corbyn in the battle for Labour leader.

On 27 August supporter of big business, turned 'socialist' within 24-hours, Owen Smith, sneaked into Stoke virtually unannounced. He was given the opportunity by the bosses of Middleport Pottery to speak in their factory to about 25 people, who may or may not have been their employees.

The vast majority of people who live in Stoke-on-Trent remain completely unaware that this attempt to portray Smith as a friend of the worker had actually taken place. However, he was able to muster some support. Local anti-Corbyn Labour MP's Ruth Smeeth, Stoke North, and Rob Flello, Stoke South, were there to lend their support although Stoke Central MP Tristram Hunt for some reason couldn't make it. Maybe he was busy plotting the next stage in trying to stab Corbyn in the back or looking for a picket line to cross.

Then on 1 September Jeremy Corbyn arrived in the city centre at midday to speak from the top of a fire engine provided by the fire fighters of the FBU to over 1,000 ordinary working class people who had come from all over the city to support Jeremy Corbyn and his anti-austerity message. If the rally had been in the evening it would have been at least double that figure!

Among the crowd there were trade union flags from Unison, CWU, Unite and others. Some nearby workers came in their dinner break. Parents brought their teenage sons and daughters.

There was loud applause for every measure Corbyn outlined - from the scrapping of zero-hour contracts to renationalisation of the railways.

Jeremy referred to 'the movement' more than once to describe what is taking place across the country. This growing movement is against austerity and for real socialist change. It includes Labour Party members, trade unionists, anti-cuts campaigners and socialists from other parties like the Socialist Party.

Local Socialist Party members had three campaign stalls at the rally calling for the de-selection of the Blairites and got a very good response. A large proportion of those who we spoke to recognised that if Corbyn remains as leader then the Labour right wing will not stop trying to "stab him in the back."

One man said: "Do we need de-selection? Too right we do, starting with the MP for where we are standing now, Tristram Hunt."

In total 250 signed up and 135 people bought a copy of the Socialist, which every week has extensive reports and analysis of the movement behind Jeremy Corbyn and the fight for socialism. 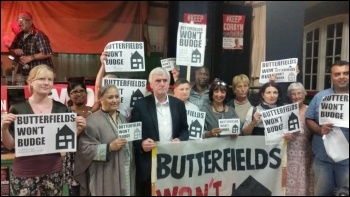 Socialist Party members accompanied Butterfields tenants to a lively Labour leadership rally in Walthamstow, addressed by John McDonnell. In the packed hall we all chanted together and held up 'Butterfields Won't Budge' signs, to help ensure tenants' voices were heard. The Butterfields campaign is one of the most significant campaigns in the borough in a long time, so it is unfortunate that the Momentum organisers had not invited a tenant to speak on their diverse platform. John McDonnell himself, however, gave a real boost to the campaign when he offered his support (see below). John's policies were extremely popular in the room. On our campaign stalls, we discussed with people about what is necessary to achieve a government that will be able to implement them. We talked about the need to kick out the Blairites, using a petition calling for reselection.

Butterfields tenants joined a packed Momentum rally on 3 September in Walthamstow, east London, in support of Jeremy Corbyn in the Labour leadership election.

The star speaker, Shadow Chancellor John McDonnell, was met with rapturous applause, particularly when he proclaimed: "A Labour government would build a million council homes and introduce rent controls."

However, the tenants of Butterfields cannot wait until 2020. They need help now. Families are under threat of eviction by their greedy asset-stripping landlords Butterfields E17 Ltd. Several court summons have been issued in the last two weeks - the situation is urgent.

John acknowledged the lively Butterfields Won't Budge campaign, and met with tenants at the end of the meeting. Nicole Holgate said: "He listened and promised to do all he could to help us. We think that's great." He also commented that he might be able to pursue RBS, the bank bailed out by taxpayers not so long ago, that is now behind the landlords in their attempts to boot out taxpayers! Also he offered to re-tweet our financial appeal when we go to court. Linda Taaffe of Waltham Forest Trades Council said: "This is a real boost for the campaign to stay, and will encourage tenants to stay strong."

The annual Burston strike commemoration rally was held on 4 September to commemorate the Burston school strike, the longest strike in British history, which took place between the first and second world wars.

Jeremy Corbyn addressed the main rally focusing on the lack of social housing and the Tories attacks on education to rapturous applause from hundreds of trade unionists and his supporters.

Socialist Party members sold over 70 copies of the Socialist and our campaign stall sold £100 worth of socialist books and material. 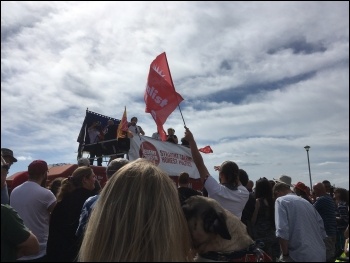 3,000 spectators in Ramsgate were in high spirits on 3 September as they waited to hear a new kind of politics and what the establishment see as the most dangerous man today to the political status quo - Jeremy Corbyn. He strolled into the crowd and made all the formal hellos to supporters who helped set up the event and made his way to the stage to make his speech - a fire engine donated for service by the Fire Brigades Union.

We gave out leaflets and sold 15 copies of the Socialist to people looking for a way to organise and fight back.

Corbyn's speech was good, flagging up some important ideas on investing in renewable energy, saving public services and a £10 an hour minimum wage now. If Corbyn sticks to socialist policies and stands up to the war mongers in and around the Labour Party, then his anti-austerity message will attract working class support which will win him the next general election.