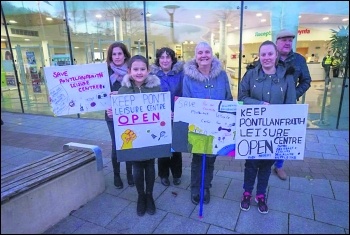 Campaigners in Pontllanfraith have forced Caerphilly Council to back down on plans to close Pontllanfraith leisure centre. Their victory shows that if you fight the cuts you can win.

This is the second successful blow against the cuts in the Blackwood area. Two years ago, in a hard-fought campaign, the same campaigners stopped the closure of the leisure centre in Cefn Fforest.

At a very well-attended public meeting called to organise a fightback, individual after individual explained how important the leisure centre and its football pitch is to the whole community.

In a blatant attempt to wrong-foot the campaign, the council announced that it would be installing a new football pitch five miles away.

The meeting agreed one area must not be pitted against another. They pledged to ask other areas for solidarity - and to give solidarity if other facilities were threatened.

School children and pensioners - people of all ages - made banners together and went to lobby the council.

Councillors were unimpressed. Rather than give up, campaigners determined to take Caerphilly Council to court.

They secured the help of a solicitor with considerable experience of fighting such cases. The solicitor sent a letter to the council informing them of the legal proceedings - and the very next day, the council backed down.

"We have listened to the community," the council declared disingenuously, "and it is clear from the feedback received... that there is widespread opposition to the closure of this facility... We have agreed that we will defer the decision".

Caerphilly Council has one of the largest reserves in Wales. They should be dipping into those reserves to preserve jobs and services - while at the same time banding together with other councils to demand the funding we need from the Welsh Assembly and Westminster.