Camden council cuts mean four nurseries will lose all their places for two, three and four year olds. Campaigners lobbied the Labour council against the £600,000 cut to the budget on 2 March.

Short reports of workers' struggles including victories for cinema reps and housing workers and a traffic wardens strike.

Unison members in Camden, north London are on strike on 2 October against parking contractor NSL, fighting for an £11.15-an-hour wage

It's one world for the super-rich, and another one for the rest of us including live reindeer and lumps of coal.

Short reports on some of the latest trade union struggles including Bromley library victory, academy opposition in Camden and a Liverpool dockers strike.

Unite the Union members at UPS Parcels in Camden have won a long-running battle against bullying and racism.

The Tories' Housing and Planning Bill is now an Act, to be implemented in April 2017. The Kill the Housing Bill campaign set up last autumn is now renamed Axe the Housing Act. Another national demo has been called for 18 June.

Youth workers and teenage service users lobbied Camden council on 6 April in defence of youth services which the Labour council plans to slash.

Labour councils in London have sat on their hands as the national housing crisis grips their boroughs. Now they resort to cooking the books and 'pop-up homes' to cover it up.

In Tower Hamlets on 17 February a second People's Budget meeting is being held jointly between the Trade Unionist and Socialist Coalition and the Tower Hamlets Independent group of councillors.

Members of lecturers' union UCU are fighting job cuts at the Open University. We report on struggles in Bristol and Camden, north London.

A Labour councillor responsible for closing all his area's public toilets has been caught relieving himself on the street.

After an 18-month long campaign, school kitchen workers in Camden have won the London Living Wage 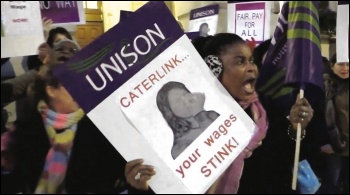