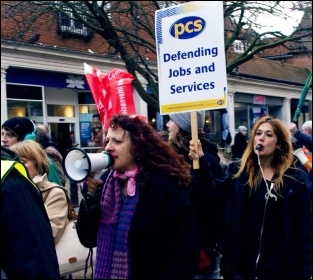 Marching to save children's centres in Canterbury

Kent socialists, trade unionists and parents from the Save Kent Children's Centres campaign staged a 70-strong march through the centre of Canterbury on Saturday 15th February in protest at the closure of 12 children's centres by the Tory county council.

Following two previous demonstrations and thousands of names on a petition, Kent county council retreated from its initial proposal of closing 23 children's centres. The protests of parents, underpinned and organised by socialists in the trade unions, forced a backtrack on 11 centres.

In the last week, however, up to 300 staff at the children's centres have been told that they will have to re-apply for their jobs, as opening hours of centres are reduced and the council seeks to strip out resources. These resources include fully qualified teachers at each centre. 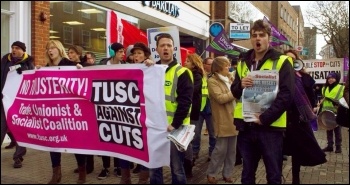 Saturday's march culminated in a rally addressed by David Lloyd from the Unison branch responsible for the workers in these centres. He slammed Kent county council for ignoring its own procedures and failing to heed a parents' petition to refer the decisions on closures back to the full council. Parents and workers are under no illusion that the full council would decide differently, but it would give more space to build the campaign against all closures.

During the rally, local library campaigners from Strood and Whitstable spoke about the need to link up the campaigns. Support was voiced from every quarter of the room for a campaign against all cuts. Mike Sargent from the RMT executive and Trade Unionist and Socialist Coalition (TUSC) steering committee received hearty applause when he demanded election candidates who are accountable, unlike any of the main parties.

Though Unison is to debate holding an indicative ballot for strike action in the coming months, the Tories have now pushed through this year's budget. Managers have been bullying staff to keep them from taking leaflets when going to work, let alone getting involved in the campaign. 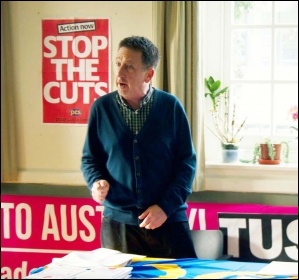 The Unison branch committee, working with the NUT and ATL, who represent teachers working in the centres, have restricted themselves to lobbying. To win a ballot, they would have to lay out a detailed plan of action to defend the 600 jobs at risk over the next three years and link up with other unions county wide.

Members of the Socialist Party have been pushing exactly this option - and it would be rendered even more powerful by coupling it to running election candidates who will vote against all cuts. Virtually everyone who addressed the rally - far beyond the Socialist Party members or known TUSC supporters present - said something similar about backing anti-cuts candidates.

Although there were a few Labour Party activists and a smattering of Greens present, it was clear that neither the Greens nor Labour had mobilised their members. In Canterbury alone, Labour has 400 members. A Green candidate was heard boasting that the Greens have several hundred also. The most either could muster was to describe the emailing of Sure Start redundancies as "insensitive".

TUSC had by far the most visible presence on the demonstration and it was clear from the rally that it correctly articulated the demands of the local activists. The mood is there for a political alternative to austerity, even in the heartlands of Tory Britain. It is our responsibility to consistently provide the answers for which they are searching, and to build their confidence in TUSC.

Saturday's demonstration in Canterbury was a strong step in this direction.

This version of this article was first posted on the Socialist Party website on 17 February 2014 and may vary slightly from the version subsequently printed in The Socialist.