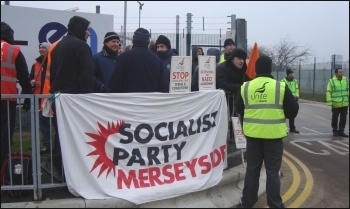 Over 100 construction workers from across Cheshire and Merseyside protested at the Capenhurst site near Ellesmere Port today, against the employers' threat to national agreements.

This needs to be the start of a major campaign if the employers don't immediately back down.

Delegations of construction workers from sites in Cheshire, and a coach-load from Liverpool, made for a vocal protest with all three construction unions (Unite, GMB and Ucatt) represented.

The site is owned by Urenco, for whom main contractor Jacobs Engineering are building a storage facility for nuclear waste.

"Besna for the Blue Book industry" is how many are describing the attempt by Jacobs and other construction employers to get out of the national agreements. 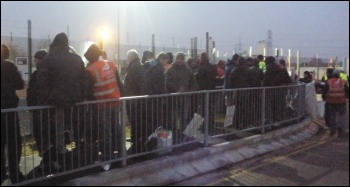 Construction electricians in the JIB contracting section of the electrical industry won a famous victory after months of fighting against their employers' attempts through the 'Besna' to rip up the previous national agreement, deskill the job, and cut pay by up to 35%.

Now it seems employers on the 'Blue Book' projects covered by the National Agreement for Engineering Construction (NAECI), which covers sites such as power stations and oil refineries, are looking to do the same thing.

Jacobs has replaced its HR manager at Capenhurst by one who tried to break the NAECI national agreement at the Lindsey Oil Refinery (LOR) in 2009, a clear signal to workers and their unions.

According to Unite, Jacobs and Urenco are "attempting to renege" on bonus payments, costing workers around £100 a week, and on disciplinary procedures.

The GMB says that the employers' excuse is that "the job is not large enough" and so it shouldn't be covered by the national agreement! Capenhurst is not the only site where the employers are using this excuse. 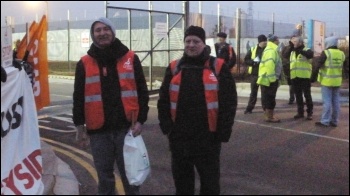 Work now being done by Urenco used to be done by the Nuclear Decommissioning Authority (NDA). This included decommissioning and storage operations, as well as the processing of government-owned byproduct/legacy material from uranium enrichment through Urenco's Tails Management Facility (TMF).

The NDA sold its part of the site to Urenco in December 2011, so in part this dispute is also linked to privatisation in the nuclear energy industry.

At a time when the number of workers covered by the NAECI has fallen from nearly 7,000 to just over 4,000, in 18 months, it's clear what the employers are after.

Any weakening of conditions now, by sidestepping or watering down the national agreement even just on a few sites to start with, will be a quick step towards Besna-style hammering of pay and conditions across all the sites and the prospective 'Waste to Energy' projects.

The construction companies want to boost profits by avoiding paying the proper agreed rate for the job and honouring the agreed terms and conditions.

They also want to avoid union involvement in how labour is employed and in disciplinary procedures.

Strong unions on site are absolutely crucial at a time when the blacklist has been exposed in the construction industry, through which the big companies victimised workers who wanted union organisation on the sites or even just proper health and safety protection. 49 building workers were killed on the job in the 12 months up to March 2012 and many more injured.

It's clear what is at stake. But construction workers can win, if they are prepared to take action. Walkouts on a national scale protected the NAECI at LOR, and while the hundreds of locked-out Saltend workers couldn't get their jobs back, they were able to win enhanced redundancy through fighting. 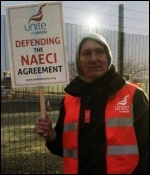 Last month, workers in Runcorn TPS walked off the job for a week to secure better facilities, and succeeded.

Protests in Cheshire and around the country will send a clear message to the employers that workers will fight to defend NAECI.

Today's demonstration and the solidarity protest in Cardiff are a strong start. The possibility of a dispute with an employer should be investigated, which construction workers nationally can group around.

This has to be based on building the union organisation on all sites, with democratic elections of stewards.

The battles of the last four years show that the bosses want to maximise profits on the backs of workers by reneging on hard-won agreements.

But recent battles show that workers can defend themselves. Learning the lessons of the LOR and Besna victories will stand workers in good stead to beat back the bosses' latest attack. 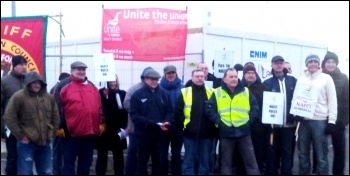 Workers at the site gave a warm welcome in freezing temperatures to protesters at the gate of the site as they went into work.

Meurig Thomas, Unite union executive council member for the construction section, warned that they would be back to put pressure on the company and explained that pressure has to be brought to bear on councils like Cardiff council to ensure that contracts are not awarded to contractors like Cnim who refuse to abide by the NAECI agreement and undermine wages and conditions of construction workers.

As a result of pressure from construction workers and electricians the Welsh government is considering refusing to give contracts to companies that are not using a blacklist against trade union activists in the industry.

This must be widened to include companies that go outside of national agreements and also be applied to Welsh councils.