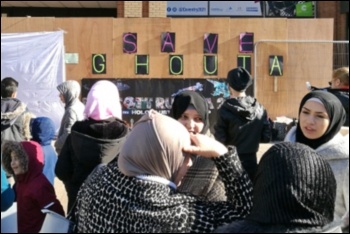 Demonstration in solidarity with the people of Syria, Coventry, 25.2.18, photo by Coventry Socialist Party   (Click to enlarge)

A protest was held in Coventry on 25 February to stand in solidarity with the people of Eastern Ghouta, Syria - where 500 have been killed recently by bombing with many more injured.

At short notice around 65 people assembled, many originally from Syria. Speakers spoke passionately about the situation facing people - with millions displaced from their homes, families separated and lives shattered.

It was pointed out by speakers that the so-called international community has abandoned the people of Syria. The various governments, whether that be the UK, US or Russia, are busy vying for influence at the expense of ordinary people in the region.

But there is another kind of international community, which stands in solidarity with workers and the poor in Syria.

As our leaflet said: "We need to build mass movements of ordinary people both here in the UK, and across the Middle East.

"These need to provide solidarity to those affected while at the same time being armed with a socialist programme for revolutionary change that can cut across national, religious and ethnic divides, to build a society that puts an end to the chaos of capitalism and imperialism."

This version of this article was first posted on the Socialist Party website on 1 March 2018 and may vary slightly from the version subsequently printed in The Socialist.