Readers' opinion: Keir Starmer's 'new management' Labour has just taken a further right turn away from the traditions of the labour movement 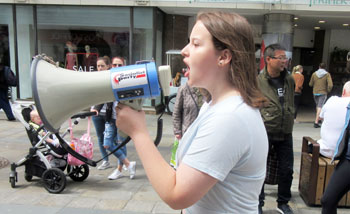 Since the early part of the year, members of Carlisle Socialist Party and the Cumbria branch of Unite Community union have been active in the campaign to 'Save our NHS', organising support firstly for the national demonstration in London on 4 March, and subsequently for the two rallies in Carlisle on 8 April and 4 June.

Hundreds march to save the NHS

The demonstration on 8 April was a great success.

What kind of people would build a hospital children's ward with a firewall which stopped just above a false ceiling, allowing smoke and flames to spread? And keep these and other dangers hidden from the staff, patients and even management of the hospital?

The Tories have already cut doctors, nurses, student nurses and 15,000 beds. Now the government intends a further £22 billion of cuts through its 'sustainability and transformation plans' (STPs).

The background to the misnamed 'success regimes' in Cumbria - in reality closure of beds, hospitals and services - is creeping NHS privatisation, cuts, increased workload and pay freezes

Disabled People Against the Cuts (DPAC) called a week of action, 4-10 of September to coincide with the beginning of the Paralympic Games.