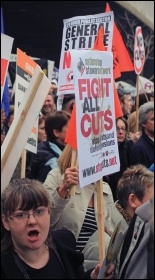 Newham Labour plans to sack and reinstate workers on inferior pay and conditions, photo by Senan   (Click to enlarge)

The all-Labour council in Newham, east London, is threatening to sack up to 1,300 of its workers.

Following years of pay freeze, the council plans to have the entire workforce sign a new contract with reductions to maternity pay, overtime rates and night pay.

This year the council passed a £50 millon cuts budget. Afterwards, the mayor, Sir Robin Wales, said: "Londoners would all say that's an absolutely excellent budget!" It seems not all Londoners would.

General union Unite has launched a campaign against the attack, planning protests and demonstrations. The Socialist Party supports this and will campaign to build the widest possible movement against these and all cuts in the borough.

The lobby called on Newham council to set a no-cuts budget, using its reserves and borrowing powers to stop austerity while building a campaign for the much-needed funding from central government. In 2015-16, Newham had £161 million in general reserves.

But instead, as Unite's press release points out, the Labour council would rather attack employees' pay while maintaining Sir Robin's £81,000 salary.

Newham's 60 Labour councillors could vote against austerity, like Labour leader Jeremy Corbyn has pledged to - and propose a strategy to fight back, like TUSC. Newham residents and workers deserve councillors willing to oppose austerity. If those currently in are not willing, they should step aside for others who are.

If the council refuses to listen, a serious campaign including strikes from Unite and the other council unions could defeat the onslaught. Teaching assistants in Durham have shown a fighting strategy can defeat austerity.