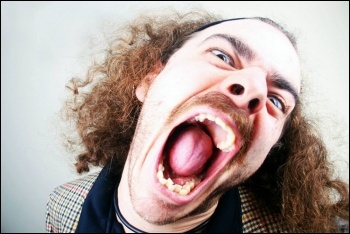 "You can relax. There's no trick questions - this isn't an Atos work capability assessment." The Daily Mirror justly placed this shrewd aside in the top three gags at this year's Edinburgh Fringe.

But socialist comic James Ross has more to offer than throwaway one-liners.

He is unabashed in his Marxist politics and gabby smarts. Unlike some left-wing intellectuals on the circuit, he avoids the traps of cynicism and aloofness.

James's observational humour is generous and proudly feminist. No rape 'jokes' here - he only attacks the powerful.

In the absence of a plot, combustive energy and fierce intelligence drive Leopardoptera, his latest hour-long show. He founds a religion around an audience member. He relives the castaway psychosis of working from home. In one routine, he explains the strategic considerations of where to stand in a row of urinals.

James revels in the unconnectedness of his material, giving it the irresistible momentum of a drunk on an obstacle course.

But that’s not to say it’s sloppy. Quite the opposite. His wit sparks off in all directions, never missing an opportunity for more laughs - as befits his improv background.

If there is any drawback, it is that the audience must occasionally run to keep up. But that is a small price for an outstanding hour of warm, inclusive and detailed comedy.

James is planning a UK tour of people's front rooms, in an attempt to "get comedy out of the clubs and bring it to the people". If you and ten or 20 friends can cram into a living room, get in touch!

He is also available for benefit gig bookings. Contact james.martin.ross@googlemail.com.

Monthly at the Rag Factory, off Brick Lane