This was a public relations move which allegedly would show the citizens of Liverpool the difficult job the council had in responsibly managing the massive cuts inflicted by the Con-Dem government, while asking for guidance on what cuts they should make to save a further £51 million next year.

Those who had successfully applied for tickets were met at the door by police who requested sight of the ticket, plus ID.

The same procedure took place once inside the town hall to satisfy security personnel. All this for the privilege of listening to council leader Joe Anderson asking Liverpool's long-suffering workers what cuts he should make.

Some 120 people out of a population of 460,000 had to overcome this bureaucratic maze to gain entry to this riveting event.

However, a hundred activists outside the town hall and a substantial number inside made sure the debate was widened to discuss fighting the cuts and developing a campaign against the government that could spread across the country.

From the outset the organisers had planned for a rigidly-controlled type of event, with a local radio commentator and supporter of Anderson chairing the meeting and reading out submitted questions.

For the first twenty minutes things appeared to be going according to plan, with short questions followed by long boring convoluted answers by Anderson and his neoliberal cohorts on the platform.

Then a woman whose child had been deprived of Sure Start facilities threw a verbal bomb into the proceedings declaring her total opposition to the council's cuts programme. 'You're a disgrace,' was her riposte to Anderson's plea for understanding that he had a 'difficult job,' but displaying immense fortitude and grit he shouted that he was determined to take the courageous path of carrying out the cuts.

At this stage the audience would not have been surprised if Joe had revealed the fact that he was wearing a hair shirt. When he declared that his 'intentions were good', he was reminded that the road to hell is paved with good intentions.

This was followed by further verbal bombs thrown by outraged citizens whose services were already either terminated or savagely cut back.

Joe received some respite from a timid questioner who wondered whether zillions couldn't be saved by emptying bins every fortnight instead of every week.

He visibly heaved a sigh of relief and took fifteen minutes to answer this question with a rambling answer which was up there with the manic discussion currently underway over the future of the eurozone.

This allowed the flustered chair to gain some composure after bellowing for order and calling on people to stick to the script.

Labour leader Anderson was thoroughly inconsistent throughout the debate, on the one hand agreeing with protesters that the government's cuts were devastating while on the other hand arguing that he would be able to manage the cuts with a minimum of suffering.

The truth is that despite the fact that Liverpool's cuts package is only just beginning, people are already suffering.

Over a thousand workers have left the council in the last year, many hoping to find work which would leave them with their severance package in the bank.

But most have realised that there aren't any jobs out there and have soon gone through their pay-off.

This is the result of cuts from this year's £91 million which have yet to be fully implemented. A number of angry speakers made the point that services to vulnerable people were already woefully inadequate and another cut would render them useless.

But Joe, the other Labour councillors, and Liberal councillor Steve Radford, argued that spending more money didn't mean better services and that some services are improved by private sector involvement. These comments were met with jeers of derision from most at the meeting.

There were calls for the Labour councillors to make the same stand as the Militant Labour councillors in the 1980s but Joe responded by saying he was not prepared to martyr the city and allow Tory mandarins to come in and take over.

Tony Mulhearn, who was a leader of the 1980s' struggle, told the platform that the discussion was unreal, asking people to recommend which cuts to make while the real culprits, the bankers, continued to gorge themselves on bonuses, and billions were being uncollected from the tax dodges which , if collected, could practically solve the crisis overnight.

To ask people to engage in this cutting exercise was obscene and an abdication of leadership by Joe Anderson. 'Our policy should be no cuts at all', he said.

This was greeted by loud cheering and a standing ovation from a substantial section of the meeting. Tony pointed out that Joe was in a position to develop a mass movement in the city similar to the one built in the 1980s.

Anderson responded by saying that times had changed and that back then he himself had campaigned for Tony, this was when he was a socialist but now he called himself a realist. There was a deep groan to this as people translated it to mean he'd sold out.

A series of very professional graphs and pie charts was presented which rammed home the financial and social catastrophe which was hitting the city, indicating with icy precision the options for cuts which the audience was expected to approve.

If a similar set of graphs had been presented outlining the development of a mass campaign against the cuts spearheaded by the council and local authority trade unions, there is no doubt that it would have received enthusiastic support.

Calls for a vote on the proposals were studiously ignored by the chair who, by the end of the meeting had abandoned his script in the face of the anger confronting the platform.

The meeting limped on to a desultory end, with one speaker expressing his long-standing admiration for Joe. It was subsequently revealed that he was an ex-Lib Dem councillor.

Joe Anderson continued to regurgitate that the 67% of the vote that Labour received in the last election was an endorsement of his cuts programme.

He was told firmly he was deluded. Working people had voted for him to protect them and not to attack them.

The meeting confirmed that Liverpool Against The Cuts would have to give extra impetus to building a mass campaign to build support for the 30 November public sector strike action and mass action that would have to follow it, to defeat not only Cameron and his millionaire cronies but also councils like Liverpool. 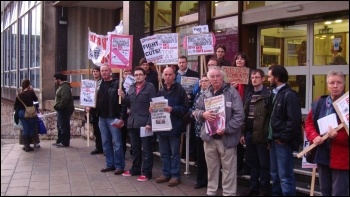 The expectation of Hart was to show the media that DCC were listening to the public. However, DCC never expected to be greeted by 30 Exeter anti-cuts activists, with banners, placards and a megaphone.

The protest then entered the meeting and was pleased to see the monopoly-like game that had been used in previous meetings had been dropped, evidently as DCC were worried about possible action.

This board game, which Hart calls "Devonopoly", disgustingly asks members of the public to decide which areas should be cut, in reality, who should lose their jobs, their services and even their homes.

Instead, Hart held a question and answer session, in which Socialist Party members and Exeter Anti-Cuts Alliance (EACA) supporters dominated.

Speaker after speaker lambasted the Tory leader and his austerity ideology. Even more importantly a number of speakers raised alternatives, like the idea of initially using reserves, drawing up a 'needs budget', with some even challenging the nature of capitalism itself.

EACA further raised its profile and two people were interesting in joining the Socialist Party.