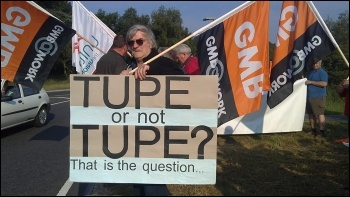 Construction engineers protest after being locked out, Fawley oil refinery   (Click to enlarge)

Protesting outside Gate 1 at the massive Exxon refinery at Fawley, Southampton, twenty locked out fabrication workers began their fight after being sacked without their redundancy rights last Thursday.

Their employer PTF Engineering, that had a contract for the maintenance of the site, was taken over by Hertel with all workers transfered under TUPE regulations. 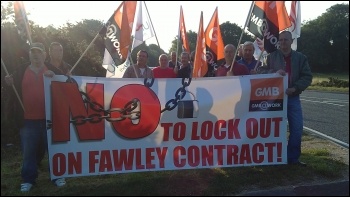 Construction engineers protest after being locked out, Fawley oil refinery   (Click to enlarge)

Sacked with no redundancy pay and no notice after years of service. Sacked workers explained: "We provide 24-hour support for Fawley, with everything on site ready to go.

"Hertel have no one local to do the work, so who's going to do it?" In the view of some there, this was "no accident", with Hertel and others seeking to undermine trade union terms and conditions on sites across the UK.

This is the latest battleground following recent disputes at Saltend, Staythorpe, Lindsey and elsewhere.

Send messages of support to gary.cook@gmb.org.uk

The twenty locked out fabricators continued their protest at Exxon Fawley this morning. This follows the failure of Hertel to honour TUPE regulations following the transfer of the new contract on Friday 1 July.

PTF workers, armed with leaflets about the dispute, stopped hundreds of workers driving onto the site to highlight what was happening. All gave their support with some saying they would come out in support if a picket was put up.

GMB members are now waiting to hear that the dispute has been made official. This will be an important boost to the dispute, especially to those now working for Hertel who will feel more confident that action can be taken to ensure those sacked can get their jobs back.

The positive response was commented on by those locked out: "It's a sign of the mood in there, not a single person screwed up the leaflet and threw it back.

"Hertel want every contract at Exxon, so with what's happened to us, no one in there is safe." 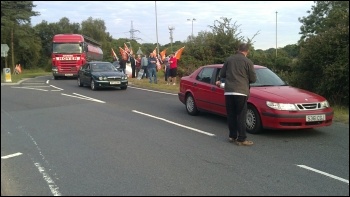 PTF workers are planning to take their fight to Hertel HQ in Middlesborough and were pleased to hear there is support from ex-Redhall workers who were locked out at Saltend.

This version of this article was first posted on the Socialist Party website on 4 July 2011 and may vary slightly from the version subsequently printed in The Socialist as Lock out at Fawley.