Hands off our forests! 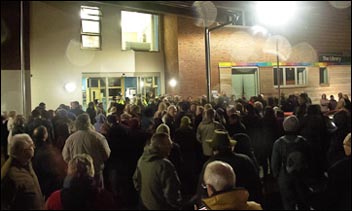 THE TORY MP for the Forest of Dean, Mark Harper, was on the ropes last Friday (4 February) when he finally appeared at a public meeting to face his angry constituents.

The last public meeting held in the Forest on the issue of cuts in library and youth services and the proposed sell-off of Forestry Commission land attracted 500 people.

Harper failed to attend and weeks later chose to organise a meeting giving only 24-hour's notice, with no public advertisement, in a venue which could hold 150 people.

250 more stood outside the building for two hours in wet and freezing weather waiting to speak to him when he came out.

Harper left by the back door and jumped straight into a police car to be taken away. Just another cowardly demonstration of how little he cares about the views of the people he is elected and paid to represent.

Harper thought that he could pacify the campaigners by telling them that the Forest of Dean, as an Ancient Heritage Forest would be exempted from a sell-off and would only be considered for handing over to a Charitable Trust.

Lee, a local Socialist Party member, asked him to explain how that would protect the forest from a future sell-off if, as is highly likely in times of such economic crisis, the trust failed.

The answer was that the land would go back to the Forestry Commission. The true answer, as everyone knows, is that it would be sold off to the highest bidder. 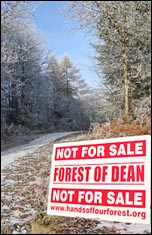 Not for Sale - Forest of Dean, photo www.handsoffourforests.org

In October 2010, after the spending review, the Department for Environment, Food and Rural Affairs announced it was selling off 15% of woods managed by the Forestry Commission in England to 'private developers and civil society' but by November this had changed to "a very substantial disposal of public forest estate, which could go to the extent of it all"!

The Public Bodies Bill, (aka a 'loggers' charter') currently being debated in parliament would have huge ranging powers, would override existing regulatory legislation and would allow the government to sell off any public assets it chose.

But 'civil society' doesn't like the idea. A YouGov poll found that 84% of people asked wanted to keep our forests in public ownership, only 2% did not and so the campaign started.

The Forest of Dean has fought sell-offs before and the local Hands Off Our Forest (HOOF) campaign is highly organised and informed and has massive support.

The Forestry Commission union, Unite, works closely with it and is represented on the steering committee. A sell-off or any kind of transfer is a massive threat to their jobs.

No-one is fooled by talk of 'Trusts and Community opportunities', everyone knows a privatisation bid when they see one. A sell-off makes no sense.

Initially, the government may make money but in the long run there would not be savings, more likely losses.

Revenue from timber sales would be vastly reduced.

According to the Guardian, the government "may have to pay more for woodland grants to private companies and it could lose money if wealthy people buy forests for tax avoidance."

Grants would have to be paid to support the upkeep of Heritage Forests, work currently done by the Commission and paid for by timber sales. Environmentally, it would be a disaster as the Commission would be unable to carry out its research work into the control of tree diseases and manage the natural habitats and leisure pursuits simultaneously as they currently do.

What started here as a local campaign focussing on the unique nature of the Forest of Dean has transformed into a national movement with the local group currently organising a national conference of all HOOF campaign groups to plan coordinated action.

It's good also that a wider mood of resistance is evident and that a new anti-cuts group has been set up with support from Stroud and Gloucester.