From: The Socialist issue 909, 6 July 2016: Stand firm against the Blairite coup 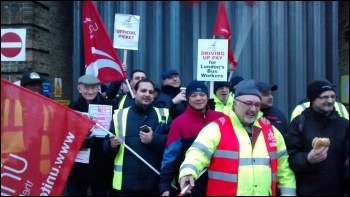 Despite Unite having called for a Remain vote in the referendum, it could place itself at the centre of political developments and bolster Jeremy Corbyn and the anti-austerity left by backing and putting into effect campaigning resolutions at this conference.

Key votes at the conference should help to decide the future direction of Labour as Jeremy Corbyn faces down an attempted Blairite coup.

Unite supported Jeremy when he first stood for the leadership and has continued to back him against the attacks of the right-wing Parliamentary Labour Party. They should use their resources to ensure his re-election in any leadership contest.

General Secretary Len McCluskey has been quoted as saying that a 'peace deal' can be brokered by the union leaders over Corbyn, while saying that Jeremy will not be forced out.

But there must be no confusion - the only deal that the tens of thousands who have demonstrated over the last two weeks want is the one that maintains Jeremy as an anti-austerity Labour leader.

It would be mistake to try and conciliate with the Blairites. But maintaining him as leader is only the start. There must be a reconstituted Labour Party open to all socialists and anti-cuts campaigners. To ensure democratic accountability to Labour's membership, delegates should back the resolution from LE1228 Branch asking Unite to support mandatory reselection of Labour MPs.

Conference will also debate the question of Trident. The union says it is opposed to nuclear weapons but has always put a multilateral position because of the threat to jobs. This time, there are resolutions calling for alternative employment and retraining.

In this, we see a return to the spirit of the Lucas Aerospace Alternative Plan of the 1970s, when union-backed studies showed what could be produced that people needed rather than military weaponry.

We understand that Unite's executive council may produce a statement along the lines of current policy, which if passed would prevent votes on composites for scrapping Trident. But the Socialist Party would back such composites if put to the vote and, if passed, this too would strengthen Corbyn's hand.

There is also a motion from the Greenwich council workers' branch calling on conference to back the decision of the Local Authorities National Industrial Sector Committee. It calls for a fight against the cuts and for Labour councillors to propose legal, no-cuts budgets by using reserves and other measures as a stop gap while a campaign against this weak and split Tory government is built.

A composite from LE1111, the London Housing Branch, in composite with the London Print Branch, should be backed as a way forward to build a campaign against the recently passed Housing and Planning Act and deal with the chronic housing crisis facing working class people.

There will also be a composite backed by the Bart's Health and Nottinghamshire NHS branches which calls for action to defend the NHS against cuts and privatisation. It also supports the junior doctors, who have recently been in action and have rejected the government's latest offer.

If these and other campaigning and left motions are passed, Unite will be able to go forward by strengthening the fight against austerity, which will hopefully see this hated Tory government thrown out of office early.

Socialist Party fringe meeting: After the referendum, get rid of the Tories!