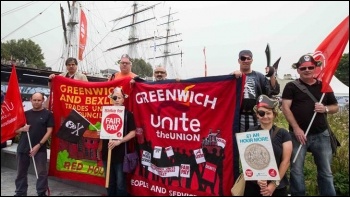 Unite have to make to it clear they completely oppose this coup and at the same time give unequivocal support to Corbyn remaining as Labour Party leader. Many delegates made it clear to Socialist Party members that if Corbyn is kept off the ballot paper it raises the call for disaffiliation and the need for a new party.

The other big debates have included Trident, just days before MPs vote on its renewal. The conference voted for an executive council statement on Trident which opposes it and calls for diversification of the thousands of jobs, many who are Unite members, that rely on it. However, the statement calls for this only when a government is in place that could carry it out.

Socialist Party members voted against the statement because there were better motions but the statement is still stronger than the previous position.

Another big debate took place on the issue of cuts and Labour councils. A motion moved by Danny Hogan from Greenwich council workers' branch, and seconded by Cathy Smith from Bromley, called on conference to back the call for Labour councils to set legal no-cuts budgets.

There was a lot of support for this, however an executive council statement was passed instead which only gave the impression of dealing with these issues.

In the debate Andy Ford from Warrington pointed out the stand of former Trade Unionist and Socialist Coalition (TUSC) councillor Kevin Bennett who was the only Warrington councillor to vote against cuts and support Jeremy Corbyn but was forced out of the Labour group. And Ted Knight, leader of Lambeth council which fought the cuts in the 1980s and was surcharged, raised the no-cuts stand of his and Liverpool council and accused current Labour councils of facilitating the cuts.