At the time of its last accounts in April, Kirklees had useable reserves of £185 million

The deal includes ten more drivers with two new rounds and a further 30 agency staff to cover for leave and sickness. Crucially two of the hardline managers have been removed

An important victory has been won in Huddersfield.

Every single Labour councillor in Kirklees, Yorkshire, has voted through over £29 million of cuts - with promises of more to come

For the third year running, Kirklees council is looking to make cuts to its library services. A further £1.9 million is to be cut from the library services budget for 2018-19.

On top of the additional days over Christmas, workers report managers are refusing holiday requests - and bullying, swearing at, and treating them "like children"

In the industrial action ballot against compulsory redundancies in Kirklees Unison, a narrow majority has voted against strike action by 57% to 43% on a 30% turnout

"We will fight, tooth and nail, to save our hospital services," is the message the people of North Kirklees will be sending the bosses of the Mid Yorkshire Hospitals Trust

Runcorn walkout: Hundreds of workers on the Runcorn thermal power station construction site walked out in support of laggers - workers doing insulation work - demanding that more local workers are hired by one of the contractors... 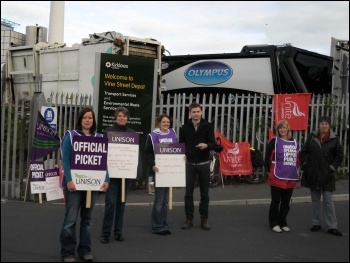 On 12-14 June, around 400 Kirklees admin workers took strike action against attacks on their pay and conditions of service

Admin workers in Kirklees had a successful one day strike on 30 May and plan further action on 12th, 13th and 14th June 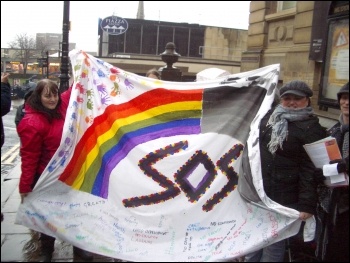 Around 100 angry parents and their children demonstrated through the streets of Huddersfield on Saturday 3 March against Kirklees council's proposals to mothball half of the 32 children's centres, writes Mike Forster.