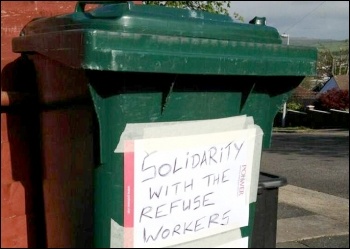 After the tremendous struggle of the Birmingham bin workers, the fightback could move north to Kirklees.

We have seen rumblings over the last few weeks. In a wildcat strike early in November, bin workers refused to complete their rounds. And workers at the Huddersfield depot are in dispute over working conditions and time off during Christmas.

Since the last time rounds were changed in 2015, bin workers have worked 38 hours from Monday to Thursday. However, the bosses are now demanding collections run on Friday 5 January. This sets a dangerous precedent that staff aren't consulted on changes to agreed contracts.

On top of the additional days over Christmas, workers report that managers are refusing holiday requests - and bullying, swearing at, and treating them "like children."

Shop stewards have been denied time off to attend union meetings. Council bosses have refused to meet with senior members of the workers' union, Unison, to resolve problems. Members are now being balloted for strike action.

Huddersfield Socialist Party will stand alongside the bin workers in their struggle for better working conditions - and for changes to be consulted on, rather than the council riding roughshod over workers' rights.