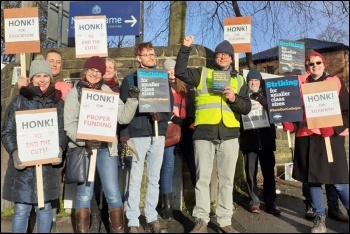 National Education Union (NEU) members at Notre Dame sixth-form, along with 34 other sixth-form colleges across the UK, took further strike action on 12 February in their ongoing dispute over funding for the sector and pay. This being the fourth strike day at Notre Dame.

The cuts in the sector have been substantial over the last decade, with 15% fewer teachers and funding cut in real terms by 22%.

This has had a knock on effect in terms of provision, with 81% of sixth form colleges teaching students in larger class sizes and cuts to courses.

The mood on the picket line at Notre Dame was good, with around a dozen staff joining the picket. They were planning to join the national lobby of parliament called by the NEU on the next day of national strike action, 27 February, and then on 10 March link up with striking academic staff in UCU at Leeds University. 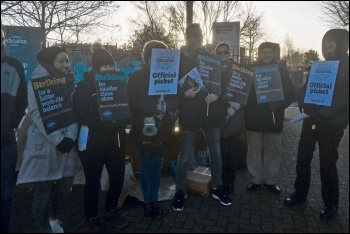 The NEU warns that sixth-form colleges could disappear. Funding is £700 million short.

On the picket line at Havering Sixth-Form College, NEU members said they thought they have been seen as an easy target for government cuts. But they are still determined to strike. Boris Johnson says 'austerity is over', so these workers want that to apply to colleges.