As reported in the last issue of the Socialist, Lincolnshire health visitors are planning further strike action after a failure to increase pay in line with other health visitors equates to a loss of about £2,000 a year.

Health visitors in Lincolnshire have been on strike against the Tory county council.

Even with a national mobilisation, the National Front could only muster around 30 supporters 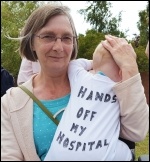 On the march against 'life and death' NHS cuts

Hundreds of residents of the Washdyke estate were shocked at plans to demolish their homes.

The 2016 local elections will be the fourth the Trade Unionist and Socialist Coalition has contested in Grimsby and we've gained experience from each one. It's clear that the mood is changing and anger at the government and local councillors doing the government's dirty work is increasing.

Trade Unionist and Socialist Coalition (TUSC) candidate Dave Mitchell won 4.1% in a council by-election in Cleethorpes. This was up on 1.8% in the last election.

I have been searching for an alternative to the pro-austerity parties. After three long years I've finally found it, writes Kieran Yeoman, Grimsby/Scunthorpe Socialist Party.