More than 70 production workers at Forbo Flooring UK in Ripley, Derbyshire began a series of 48-hour strikes on 15 October.

The day before, the workers had rejected, by a huge majority, a slightly improved offer from management for a two-year package backdated to 1 January 2019, running to 31 December 2020.

The Unite union stated that the staff have been undervalued and disrespected throughout the dispute, in addition to a prevalence of a culture of bullying and harassment in the workplace.

The 48-hour strikes are to run for ten weeks until Christmas and these will be accompanied by a continuous overtime ban. 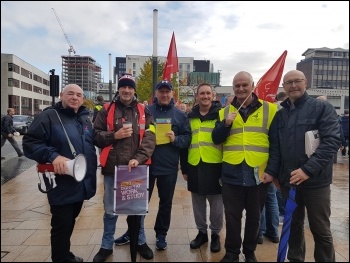 About 20 security staff, members of the Unite union, took action over bullying management at Liverpool University on 19 October. The action arose after a vending machine was damaged and two security staff suspended.

The Unite members say that the machines are often damaged by students but management is targeting staff. They also told me that management didn't follow procedure before suspending the two workers and this was the final straw after a history of intolerable management behaviour.

Unite officer Brian Nelson said there are 600 Unite members working at the university and he has received similar complaints from a number of them. Further action is being planned if the issue is not resolved, and a mass meeting of all 600 members is being proposed.

Request a speaker from Cops by emailing opposingpolicesurveillance @gmail.com

Register for the conference by at 'Undercover policing' in London at eventbrite.co.uk