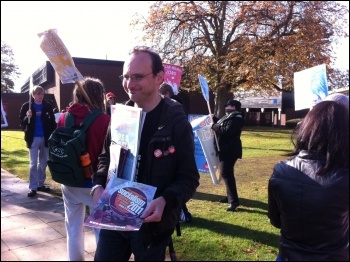 Defend the right to protest and access to ideas

Northampton students and staff were joined by Jarrow marchers on Friday 28 October as they protested at the park campus.

The reasons for the protest were varied, but it came down to two major issues. First, the university intended to cut 78 staff jobs, known as support roles.

This came in the wake of the university being awarded 'No. 1 for value added' by the Guardian newspaper's league tables.

The second major issue came when we were told that the university intended to cut the Department of Philosophy.

Knowing the importance of philosophy and being aware of the implicit threat towards other social science subjects in the future, the Socialist Students society quickly made contact with a society set up by philosophy students to defend their subject. We offered our support to their campaign. A protest was planned.

The protest itself was a fantastic coming together of different elements. We were phenomenally lucky that the Jarrow marchers were in Northampton and that they wanted to support the protest.

At the same time, the Olympic Torch arrived at the university, and the event held in its honour looked like the perfect staging opportunity for our protest.

Socialist Students and Socialist Party members assembled with philosophy students at the edge of the festivities, where we were joined by the Jarrow marchers in full voice. Some courageous lecturers also risked the disapproval of the institution.

We had not been going long, when Nick Petford, the vice-chancellor (VC), wearing a sharp suit, marched into the middle of our protest. It turned out that his temper was sharper even than his suit.

I went forward to meet him and was asked if I was in charge. My response was that I was the president of the Socialist Students society.

He then put his face in mine, clearly trying to intimidate me, and used language that I will not repeat.

It took myself and my friend Andrew - a philosophy student - to convince him to go aside for a proper conversation elsewhere.

With the VC's fury barely restrained, I experienced my first negotiation. Nick Petford did not argue well, suggesting that our protest was unfit to be seen by children and that we were embarrassing the reputation of the university.

He refused to tell us which support roles were going to be cut, claiming only that "non-useful jobs like marketing" would be going.

We found out afterwards that this was evasion, and, of course, very offensive to marketing staff.

On the philosophy department, he was unflinching: "The School of Social Sciences decided to close Philosophy during the spring".

He smugly told us that we should have protested then. Of course, at the time, this happened behind closed doors.

Few staff and no students were aware of the situation. There had been no consultation. 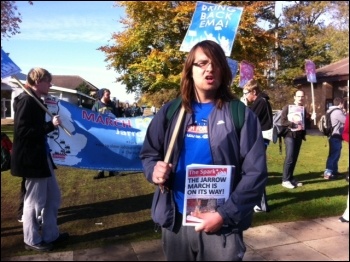 In the meantime security on campus had called the police who then told the Jarrow marchers that all non-staff or student protesters must leave the campus.

One marcher asked if this included a local Tory MP who had been using the occasion of the Olympic torch to shake a few hands and out his face around.

He had refused to sign the campaigners' petition to save the philosophy department and had attempted to peddle the usual lines of 'there's no money', which fell on deaf ears among the protesters.

The protesters left with the Jarrow marchers only when the police arrived. Prior to that we were able to make our statement clearly, and lecturers and students alike have been motivated since to increase their participation. Despite the actions of men like Nick Petford, the resistance will build. It must.

This version of this article was first posted on the Socialist Party website on 31 October 2011 and may vary slightly from the version subsequently printed in The Socialist.