Over 200 people came to the launch meeting of the #Justice4Daz campaign last week, which was set up after Coventry man Darren Cumberbatch died after "contact" with the police

Socialist Party member Paul Reilly, a branch secretary of the RMT transport workers' union in Nuneaton, is a candidate for the union's national executive committee to represent the Midlands region

Nuneaton rally in support of Corbyn

Osborne plans a bonfire of welfare, jobs and services in his budget

"From a young age I've been aware of the injustices we face at the hands of the current ruling elite, whether that be the Tory Party or the Labour Party"

Ex-mining village shows it can still fight: The pit has gone but the miners' spirit still remains in Keresley Village, an ex-mining community located within the boundaries of both Labour cut-voting councils - Coventry, and Nuneaton and Bedworth, writes Natara Hunter, Nuneaton Socialist Party.

Nuneaton's New Labour Lord Mayor Neil Phillips had a surprise recently as he chatted with campaigners from Nuneaton Against Cuts. He was quizzed by a very unusual constituent - a Dalek!, writes Nuneaton Socialist Party. 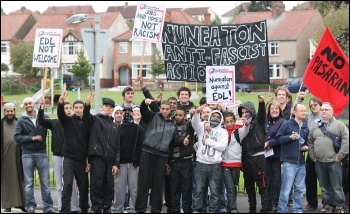 Nuneaton: community must organise against racism

Recently in Nuneaton, Warwickshire, there has been a flurry of activity by the racist and hooligan English Defence League (EDL), writes Tom Sidwell, secretary Nuneaton Anti-Fascist Action and Nuneaton Socialist Party.

Stop attacks on services for vulnerable in Nuneaton

We have repeatedly heard the government say that although the forthcoming cuts will be 'savage', the most vulnerable in society will be protected, writes Tom Sidwell, Nuneaton Socialist Party.

Postal workers reported solid support for the strike across Southampton. At Bitterne the mood was particularly determined in the face of an ongoing dispute over drivers' hours that management want to reduce:...

OVER 300 people demonstrated against proposed hospital cuts in Nuneaton on 17 August. The Acute Services Review wants to transfer some emergency care along with children's and maternity services from Nuneaton to the new PFI hospital in Coventry.