Strike against suspension of headteacher

Abuse: Cuts have robbed us of the time to talk to these young people

The recent horrific report on the cover up of large scale child sexual abuse in Rotherham was analysed in the last issue of the Socialist (issue 823). The week we have a powerful view written from personal experience.

There has been widespread revulsion and outrage at the findings of the report by Professor Alexis Jay into the horrendous abuse of children and young people in Rotherham, published on 26 August

Abbey special school is not in financial difficulties, but faces losing six teachers

Hundreds of jobs at risk at Rotherham hospital

Last week, multinational steel firm Tata announced that another 110 jobs would be lost at the Thryberg Bar Mill in Rotherham

Rotherham TUSC election challenge - No snouts in the trough!

After Rotherham MP, Dennis 'MacShame' was caught with his fingers in the till, a byelection has been called for 29 November 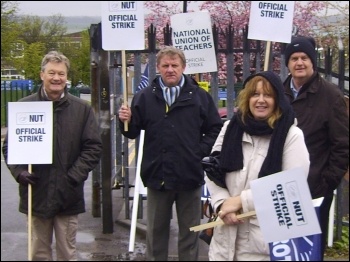 Trade Unionist and Socialist Coalition (TUSC) supporters in Rotherham have chosen local National Union of Teachers (NUT) rep, Ralph Dyson, to be our TUSC candidate in the forthcoming byelection on 29 November

Rotherham needs a workers' MP instead of New Labour frauds

Rotherham workers and youth unite against the National Front

In two weeks Rotherham has seen protests by far-right groups, first the English Defence League on 13 October followed by the National Front on 27 October 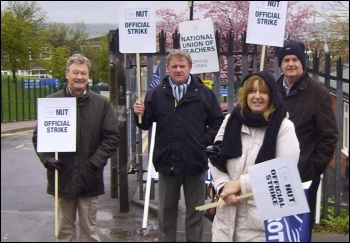 Rotherham teachers stand up to bullying

If your school has 21% of students with special needs, would you sack your Special Educational Needs Coordinator?

Over 30 members of the National Union of Teachers (NUT) at Rawmarsh Community School in Rotherham went on strike again on 4-5 May against compulsory redundancies...

After nine days of strike action taken over the last six weeks, National Union of Teachers (NUT) members at Rawmarsh Community School in Rotherham have won a reprieve in their fight against cuts and redundancies, writes Alistair Tice.