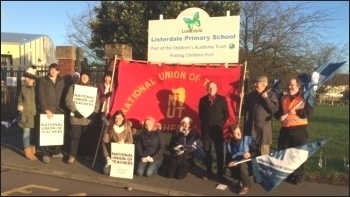 Strike against suspension of headteacher

Seven members of the National Union of Teachers (NUT) at Listerdale primary school in Rotherham have taken two days of strike action (2-3 December) against the unjustified suspension of their headteacher.

The head was suspended by the Academy Trust in September at 8am one morning without union representation. The reasons for the suspension still haven't been made clear, even the head himself doesn't know!

Rotherham NUT branch secretary Fred Sprague told me: "The Trust have said it's not for safeguarding reasons, he hasn't run off with the school fund and he can't impede the investigation because he doesn't know why he's being investigated. So this suspension is unjustified and we are demanding his reinstatement while any investigation continues."

The head has been in post at the school for six years and is known to speak his mind. The school was "Academised" last year and is in budget deficit so the suspicion amongst staff is that the head's suspension is related to all this.

The NUT members began action short of a strike in late October against job cuts and reduced hours of teaching assistants and school support staff and the increased workload due to the head's suspension. But the Academy Trust had refused any negotiations and stated that "the services of ACAS are not required".

Most parents are supportive of the action - they weren't even informed that the head had been suspended until after half-term. 75 people, mostly parents, attended an NUT-called public meeting on 2nd December.

One striking teacher told me: "We've been in a bit of a bubble. Nice cosy little school where everybody gets on. Although I was in the union I always wondered why any teacher would need to go on strike. Now I know."

Another said: "Just out of interest I googled 'teachers' strike' and was shocked by how many are going on around the country. But then felt reassured that it's not just us then."

Two days of strike action, closing six out of ten classes, has forced the Trust to agree to meet the union at ACAS tomorrow night, 4 December. Depending on the outcome of that, the NUT is prepared to take more strike action next week if necessary.

Messages of support can be sent to Fred Sprague, email: secretary@rotherham.nut.org.uk

During the ACAS negotiations on Friday 4 December, The Children's Academy Trust which runs the school, flatly rejected proposals that would see the strike action at the school suspended.

The National Union of Teachers (NUT) proposed that a resolution to this dispute would be to reinstate the headteacher whilst continuing any investigation of their 'concerns about the schools finances'. Such a resolution would neither prejudice any ongoing investigation nor any outcome.

Further strike action by the NUT over the next two weeks may now be inevitable, as the employer is failing to enter into any constructive conversation that might lead to a resolution to the dispute.

"It seemed clear to us that the employer attended the ACAS talks only under pressure from parents to do so - but with no intention of entering into any real discussion about how this dispute could be resolved.

" The NUT is encouraging parents to go to the meeting at the school on Tuesday and ask Mrs Bottomley, who is the Chair of the Trust, why she cannot agreed to the proposals we have put forward and therefore bring an end to the strike action."