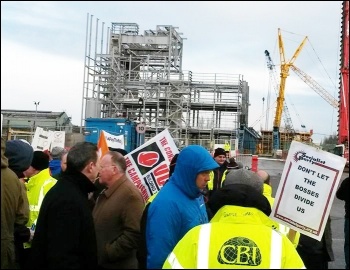 Protest outside Templeborough Waste to Energy power station in Rotherham, 7.4.16, photo by A Tice   (Click to enlarge)

Rotherham: Construction workers stop work to protest at the undermining of jobs and pay

This pool of cheap labour is used to effectively deny equal opportunities for UK construction workers to get jobs at Templeborough, Dunbar in Scotland and Margam in Wales, three sites where coordinated protests took place.

The protest stopped work for the day with nobody trying to get into the plant. So, to "keep our feet warm" we took a leaf out of the book of US trade unionists by holding a rolling picket on the main road, blocking traffic for several hours. 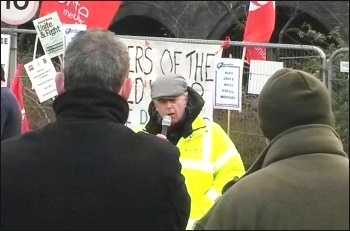 Keith Gibson speaking; outside Templeborough Waste to Energy Power Station in Rotherham., photo by A Tice   (Click to enlarge)

At Templeborough the lessons of the Lindsey Oil Refinery dispute in 2009 were to the fore amid consistent calls for strike action throughout the construction industry.

Despite union official claims to a planned meeting with Danish unions, a planned lobby of MEPs in Brussels and a parliamentary lobby prior to the EU referendum, the resounding feeling from construction workers was nothing short of 'we need national strike action, another Lindsey', to defend NAECI pay and to protect equal job opportunities for both migrant and UK workers.

There is a trade union activists' meeting planned for 18th April at Sheffield Unite's offices. Socialist Party leaflets were taken and read, and several copies of the Socialist newspaper were bought. Speakers, including Socialist Party member Keith Gibson, raised the need to unite with striking junior doctors, balloting teachers and other workers in dispute.

This version of this article was first posted on the Socialist Party website on 11 April 2016 and may vary slightly from the version subsequently printed in The Socialist.