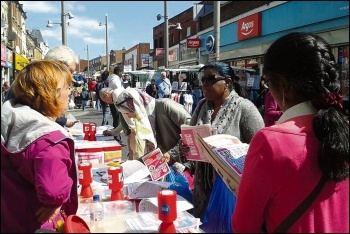 On 2 May council elections are taking place in England, along with six directly elected mayors. The Socialist Party is contesting around 40 seats across the country, as well as the mayoral election in Leicester, under the electoral name of Socialist Alternative.

Below, Stephen Armstrong explains why he's contesting the Halton Brook Ward in Runcorn, Cheshire, as the Socialist Party candidate.

"I'm standing because of the damage austerity is causing in my community and to oppose the Labour councillors who are passing on the Tory cuts instead of protecting local public services.

Council tax has risen again in Halton, and a precept has been added to our bills in order to pay for the Liverpool city regional mayor. This is despite the Labour mayor Steve Rotheram sitting on an £80 million underspend!

Last year the Labour-run council increased council tax, cut Special Education Needs funding and added 10p to the price of school meals, while sitting on a cash reserve of £4.2 million.

We should also be scrapping the tolls on the Mersey Gateway Bridge and reducing allowances for cuts-making councillors.

As in many areas, housing is in short supply and many young people, stuck on low wages in zero-hour contract jobs, cannot afford to buy homes or rent from a private landlord.

The Socialist Party's policy of building council houses to create real jobs and homes for young people, and generate income for the council through rents, would be a massive success in Halton Brook.

Austerity has also impacted massively on the lives of working-class women. Wages, opportunities, pensions and services for women have all been cut drastically in the last nine years.

We must reverse these cuts, so women can have access to services that improve their lives, such as Sure Start, childcare and domestic violence support.

Knife crime and drugs are creating real problems both nationally and locally. Sadly, two teenagers have recently been convicted of killing another in Runcorn. Cuts to youth services, the lack of life chances and austerity in general, have created a perfect storm of disaffected young people.

We should be ploughing money into youth services, to create positive alternatives to drugs and crime for young people.

I have seen the real benefits our party's programme delivered to working-class people of Liverpool when I was growing up in the 1980s.

By standing on that programme, I believe we can overturn the establishment lies told about that period, create real interest in socialist politics, and raise the profile of our party in working class communities which have been abandoned by the Blairites in the Labour Party."